The Asmik Ace/AKI/THQ series of wrestling games. To this day, they stand up as perhaps the greatest string of wrestling games ever made, and at a time in the late 1990s when The Monday Night Wars were captivating fans worldwide, these games were there to satiate people’s wrestling game needs. But how did they get there?

In general, these games are best known for the tetralogy of Nintendo 64 games from 1997 to 2000, beginning with WCW vs. nWo World Tour and culminating in WWF No Mercy. However, those who know their gaming history know that this is not the whole story. Yes, World Tour may have been the first in what ultimately was a four game series of tremendously successful N64 wrestling games. But it was not actually AKI, Asmik and THQ’s first attempt at a wrestling game of that generation. No, their first modern wrestling game was on a whole other console, the Sony PlayStation, and it was called WCW vs. the World.

This game has always been interesting to me. It was the very first game licensed by World Championship Wrestling (WCW) to come out during its boom period in 1996/1997. It was a time when WCW’s winning formula for wrestling promotion was absolutely hitting on all cylinders; Eric Bischoff had struck gold with the formation of the New World Order, which was running roughshod over WCW babyfaces while also selling merchandise like hotcakes. The company was home to some of the greatest technical wrestlers on Earth, such as Chris Benoit, Dean Malenko and Eddie Guerrero. They had deals with top promotions in Japan and Mexico, bringing exciting international stars like Rey Mysterio Jr., Ultimo Dragon, and Masahiro Chono to the WCW ring. And now, they were releasing a new video game on one of that generation’s biggest consoles, a sign that they truly had arrived.

And yet, you never really hear about WCW vs. the World anymore. It was announced, came out and nobody really said anything bad about it. But then, it kind of disappeared from people’s view. Why? Well, let’s take a look.

The game truly has a lot in common with its eventual N64 counterpart, WCW vs. nWo World Tour, and the biggest similarity is that, despite being a licensed WCW game, it plays and feels much more like a Japanese puroresu style of grappler (appropriate, given that the game was released in the United States after its Japanese counterpart, Virtual Pro Wrestling). You have a few big WCW stars on the roster, such as Hulk Hogan, Sting, Ric Flair, The Steiner Brothers, Ultimo Dragon and Chris Benoit, while the rest of the (quite large) roster consists of fictionalized versions of wrestlers from Japanese promotions.

In retrospect, I can actually see why this game probably didn’t catch on very widely. Looking at it from the perspective of a hardcore fan of quality wrestling games, it’s not so bad to have a large roster of fictionalized talent who have unique characters and move sets. But the reality is that this is a game released for the American market, with the name of World Championship Wrestling, meaning that a lot of gamers who picked up this game were expecting to play as WCW wrestlers. It’s jarring to actually play the game and see that the WCW wrestlers you are familiar with are actually a minority of the roster, and that most of the game consists of non-entities gamers don’t know and, in many instances, don’t care about. I remember there being similar complaints about World Tour; kids would play the game and say “I don’t care about this Independent Union crap! I want to play as the WCW guys!”

Most casual gamers and wrestling fans didn’t have any access to New Japan Pro Wrestling (NJPW), and so they had no idea that the fictional wrestlers in this game were actually renditions of real-life, talented puro athletes. And even if they did, I doubt they’d care much; unfortunately, a lot of casual wrestling gamers did, to an extent, subscribe to something akin to the Vince Russo philosophy of “I’m American, and I want to see American wrestlers.” Asmik and AKI’s inclusion of fictionalized Japanese wrestlers wouldn’t be as big of an issue in their later games; in World Tour, the roster is more evenly balanced between WCW/nWo talent and fictional names, and in WCW/nWo Revenge, the clear majority of the roster consists of familiar WCW roster members. But in WCW vs. the World, there are literally only a handful of wrestlers who anyone playing the game would realistically recognize, and while this isn’t a bad thing at all for the gameplay, it’s a stumbling point from a marketing perspective.

In terms of gameplay, it’s not just the roster that feels dominated by the Japanese style. In addition to exhibition matches (just singles in this game), you also have a variety of quite complex play options, ranging from simple tournaments to a statistic-keeping League, Best of Seven competitions for championships, and an Elimination series pitting two groups of wrestlers against each other. Almost all of these would be carried over into World Tour, and they present a unique array of match options much more characteristic of Japanese wrestling games than their counterparts across the Pacific.

They’re certainly very unique, different from anything most American wrestling gamers had seen before. Again, though, I think this presents yet another culture clash; having these leagues, which keep track of wins and losses makes the matches feel a lot more like a straightforward sport, just as how wrestling is typically viewed in Japan. But it doesn’t really fit the razzle-dazzle WCW product, which, while more of a sports/athletic focused promotion than the WWF, nonetheless strongly benefited from its storylines and characters as part of its launch to success.

When you hit the ring, you can see the early glimpses of what would make the AKI/THQ game series so great. The game features animations for impressive technical and cruiserweight moves never seen before in any American wrestling game, and it introduces the concept of the Spirit meter, in which the advantage in the match is drawn not by a linear life meter, but by maintaining your momentum through executing impressive moves and playing to the crowd. 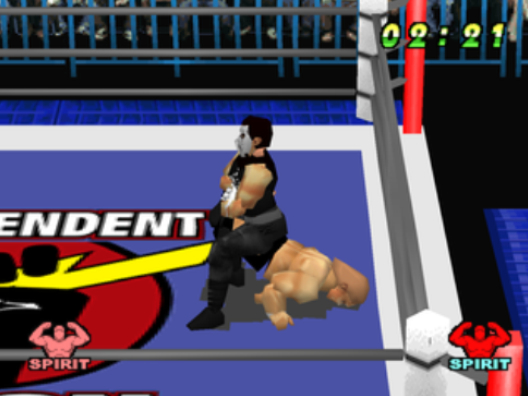 However, while history would prove the merit of these innovations, in this case, they don’t work to their fullest potential in their execution. The Spirit meter seems inconsistent; it doesn’t seem to build up no matter how many strong moves I do, and I ended up having to build it up through lots of showboating. And the gameplay just feels…off. It feels a little too frenetic and fast paced, not leaving me enough time to be methodical and carry out the type of strategic wrestling match that I’m hoping to carry out. Meanwhile, carrying out power moves consists of a grab system, where you have to grab your opponent before they can attack you, and how powerful your move is depends on how close you are to your opponent and how long you hold the grab button. It just doesn’t feel as accessible as the grapple system, which World Tour would introduce, and it limits your moveset. None of these are crippling problems; I’m still able to get a hang of the gameplay and learn how to maintain my momentum and win matches, but the process of doing so feels messier and less coherent than it could be.

Besides the match types listed previously, the closest thing this game has to a campaign is the League Challenge mode, which would also be carried over and serve the same purpose in World Tour. It’s a straightforward process in which you choose which featured wrestling promotion to compete in, and fight your way through five opponents to face the hidden boss character for the championship. But once again, this is something, which would be worked to its fullest potential in World Tour, yet stumbles in its execution in this game. Whereas World Tour’s League Challenge would allow gamers to unlock impressive big names like Diamond Dallas Page and Randy Savage, the hidden character unlocked by winning WCW’s League Challenge is…

Of all people to be a hidden character in a wrestling game, Jeff Jarrett is one of the hidden wrestlers in this game. This being in that weird stage of his career where he was in WCW, hanging out with Ric Flair, and trying to join The Four Horsemen in a way that came across like the weird awkward kid in school trying to sit at the cool kids’ lunch table. Oh, and he was wearing the wrestling outfit, which Eric Bischoff would aptly describe as looking like, “A poorly dressed male stripper.” What a strange, bizarre choice to be a hidden character.

I don’t want to criticize WCW vs. the World too harshly. It introduced a lot of great new ideas and innovative gameplay mechanics, and showed the shades of the awesome wrestling-centered experience, which future games would provide. But AKI, Asmik, and THQ haven’t gotten there yet with this one. It needs work. In terms of gameplay, it needed to be smoothed out and more focused, and in terms of presentation, it was even more excessively Asian than Go Shiozaki. It wasn’t, and still isn’t, a bad game, per se, but it’s hard to see it as anything other than what, in retrospect, it turned out to be: The prototype for WCW vs. nWo World Tour.