6 Ways WWE Could Benefit From Their Military Ties

In honor of Memorial Day I thought I would make a list related to the military. Since WWE gives out free tickets to soldiers, has had a plethora of military gimmicks and its top star has even portrayed a marine (quite crappily, but I digress) a WWE/military list seemed the way to go. Not to mention thus far I have only made WWE related lists. Still, Vince McMahon is a businessman first and foremost and so I give you 6 Ways WWE Could Benefit from their Military Ties!

1. Have Title Changes at WWE Tribute to the Troops

Currently WWE Tribute to the Troops is treated more or less like a house show. While good matches are put on, main event storylines are rarely touched upon, some production value is missing and titles never change hands. To make matters worse, WWE has had at least one title change opportunity that could have been memorable. In 2003 and early 2004 The Big Show was doing a whole lot of nothing with the WWE United States Championship until he finally lost it to John Cena at Wrestlemania XX. At the 2003 WWE Tribute to the Troops Cena also beat The Big Show, but not for the title. Having a title change then could have been a feel good moment instead of a forgettable Wrestlemania opener. Aside from this one example having title changes at Tribute to the Troops would add an element of surprise to the show, be a fun way to cap off the year and bring diversity to the location of where title changes happen.

2. Have Big Show Use his Camouflage

On the topic of The Big Show the big lug has been lumbering around in camouflage for a while now. He recently turned heel so we might have to wait a while, but I say once he goes back to lovable, goofball Big Show he makes the most of his camouflage. The Big Show could sneak up behind guys while they are cutting promos and pretend to blend in to the background when suddenly he attacks them. The commentators could play it up that Big Show doesn’t realize the only reason he manages these assaults is not because he is capable of stealth attacks, but because he is simply too big to defeat, yet Big Show is too much of a dunce to realize it. Better yet, screw waiting for the face turn! Have Big Show put on an insane Marlon Brando from Apocalypse Now gimmick. He attacks opponents using the camouflage as a disguise, but is too insane to realize it does absolutely nothing. Yes, this has the potential to be awful(ly entertaining)! 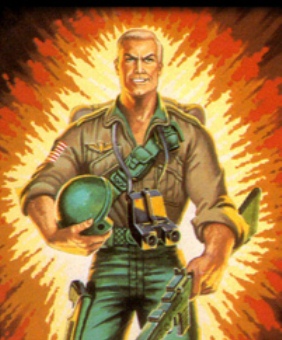 Now before the toy enthusiast get at me, I have done some research and from what I gather WWE has released some 12 inch figures over the years. However, if you ever collected G.I. Joes you’ll recall that they look quite different from what is pictured here and come with a boatload of accessories. Plus, if you look at the customer reviews on that link this figure apparently only made one grandmother happy. If WWE was making the most out of their toy department they would make a flock of grandmothers happy! Perhaps even a stampede!  Not to mention that if you have figures of the same size and quality you can have more realistic matchups. After all who wouldn’t want to see a Kane vs. Destro mask vs. mask match?

4. Have Randy Orton Cut a Heel Promo on the Military

Now I know a lot of people will say this stinks of heel Sgt. Slaughter in 1991 and maybe it does. However, one of the most annoyingly overused phrases on online wrestling forums is that the best gimmicks are a wrestler’s own personality with the volume turned way up. The reason it is overused is because for the most part it is true. Also true is the fact that in 1999 Randy Orton abandoned the U.S. military. Now, if Orton ever wants to get cheap heat and he is definitely not above doing so (just ask Eddie Guerrero fans) all he needs to do is bring up this fact in a heelish manner. I’m not saying make this the central part of his gimmick, but something more along the lines of what Kurt Angle did in 2005. Back then Kurt was trying desperately to get fans to boo him when the Cena hate was so strong that on at least one occasion Daivari got cheered over Cena. So Kurt did a little of his own turning the volume up, dipped into crazy Kurt and took some swipes at the military. While it wasn’t enough to get Cena universally loved (nothing is) it at least showed a clear attempt to make Kurt more of a heel, plus he got his comeuppance in the end. Next time Orton goes heel he could do this rather than being the poor man’s “Stone Cold” Steve Austin. While casual fans may like Orton’s face Austin enough a latter day heel Austin portrayed by Orton may be a bit too weak.

5.  Have Cena Get Attacked During his Salute 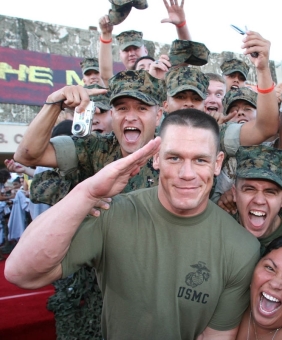 If you disliked the idea of Orton cutting a promo on the military then you’ll absolutely hate this one! I don’t recall this ever happening and am surprised if it hasn’t as it seems like such an easy way to get cheap heat. Anyway, it is pretty self-explanatory, have Cena do his standard salute and in the middle of it he is attacked from behind and given a thorough beat down. This could be especially effective if it was done in a big military town or daresay Tribute to the Troops. However, if something like that happened on Tribute to the Troops then the night had better end with Cena performing a devastating Attitude Adjustment to the attacker.

In a competitions filled with hacks and a few talented prospects thrown in, Jeremiah Riggs really stood out as something unique on the revamped Tough Enough. While Riggs had no experience as a wrestler, he did have experience being a bad ass serving a tour with the United States Army in Afghanistan and dabbling in MMA.  Also, on his first appearance on Raw with the rest of the Tough Enough crew he was the only one who showed any mic skills. So why isn’t he in the WWE? Well, he has kind of a big mouth or stands up for himself, depending on who you ask. So what? If this is really a problem those in charge of WWE developmental just need to pull him in and mold him a bit more. While they’re at it they could also do well by bringing in Luke Robinson as his partner. How Silent Rage was chosen over either of them still puzzles me.