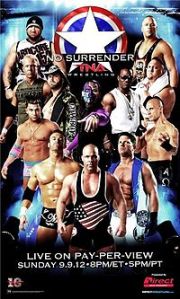 This year’s TNA No Surrender pay-per-view had a difficult card to pull off on paper. There was no world title match, four of the company’s best athletes were used in one match and the three match tournament that ended the Bound for Glory Series could go either way. In the end TNA avoided going car crash bad with this event. Still, the company has had much better shows this year and depending on the buildup could have one again with the 2012 TNA Bound for Glory event. Still, before we get their let us look at the event that was.

The Bound for Glory Series isn’t that bad of an idea, but couldn’t they change the name by now? With how much importance is placed on winning it, it should be at least as prestigious as the WWE used to make winning The King of the Ring. Heck, Mike Tenay even poked fun at how complicated the tournament is right before this match. Anyway, both guys’ injuries are played up early on, but don’t seem to factor in a whole lot until Samoa Joe hits a suicide dive and starts selling his forearm injury. As the match winds down Hardy hits a whisper in the wind, but only gets two. Soon after Joe goes for a muscle buster, but it is reversed and Hardy hits a butt ugly twist of fate. Hardy goes for a submission, but Joe reverses it into a pin. Hardy pulls out his own pinning reversal and wins.

James Storm cuts a promo saying he is, “bound for glory” before the match. Gee, how original. Bully Ray runs his mouth to start and Storm spits in his face, then slaps it with plenty of stalling along the way. There are some interesting spots in this match including Storm headbutting Bully’s groin then powerbombing him and not one, but two ref bumps. Ray picks up the win after Bobby Roode interferes and breaks a beer bottle over Storm’s noggin while Storm had Bully down with a super kick. Storm later attacks Roode backstage.

The commentators play up the student/teacher relationship of the two beforehand. Tara gets in at least a few good moves including a swinging side slam. Yet, she cannot pick up the win and Brooke rolls her up after escaping from the widow’s peak position.

Austin Aries fought The Armbreaker with no decision rendered

Austin Aries cuts a promo beforehand saying his encounter with the Aces & 8s’ henchman isn’t going to have a referee or pins, but is going to be a fight. After some stalling The Armbreaker comes out and circles the ring. Aries suicide dives at him and then just starts throwing punches. This does not last long because The Armbreaker gives Aries a low blow when he is trying to unmask him. The Armbreaker beating down Aries is slow and plodding, giving me horrible memories of Black Reign. Aries gets back in control when in the middle of a powerbomb attempt he throws powder in his opponent’s face. Aries eventually hits a brainbuster and is about to unmask The Armbreaker when Aces & 8s interfere. The TNA locker room empties including Hulk Hogan. After Aces & 8s is run off Bully Rays tells Hogan that Jeff Hardy has been hurt and Hogan calls for the cops. The plot thickens. Should I even rate this? I guess so.

Sonjay Dutt’s shoulder injury is hyped leading into the bout. Odd to see that Dutt looks like he is on the Scott Steiner aging system where he looks about 20 years older after five years. Still, he can go with the best high flying athletes and proves it in particular with a move where he rolls onto the ring apron directly into giving Zema Ion a hurricanrana. Zema is no slouch either and eventually hits a belly-to-back suplex variation where he completely flips Dutt over (okay maybe Dutt deserves more of the credit for this). Continuing, Dutt gets in a top rope hurricanrana and follows it with a standing moonsault. On the outside, Dutt hits a lightening quick Asai moonsault then gets in a springboard back on the inside. Zema gets in some offense and goes after Dutt’s shoulder with a submission. After a series of two counts Zema comes up with the win.

Magnus has control of the match more or less from the start. He locks on a Texas cloverleaf, but it is not drawn out long enough to add to the match. Magnus plays to the crowd a lot (even more than RVD) until RVD gets things going for himself with a running spin kick. Magnus gets in a little more posing and RVD gets in a lot more offense until hitting the 5 star frogsplash for the win. Meh.

Christopher Daniels gets in a Thunderlips reference and drinks an appletini in the pre-match promo so yo know its going to be good! Kurt Angle and Christopher Daniels start off with Daniels slugging Angle, but Angle fights back with more powerful blows. AJ gets tagged in as does Kazarian. AJ does little except a snap suplex before tagging in Kurt. AJ gets an equally quick tag in and starts getting double teamed. Kurt gets the hot tag after AJ pushes his opponents into each other. Kurt gets knocked down, but Kazarian only manages a one count. AJ and Daniels are both tagged in after an Angle slam from the ropes on Kazarian. AJ doesn’t do much except eat a sick looking dropkick from Kazarian. Angle gets back in and the straps come down, but he is unable to score a pin or submission. AJ does a springboard into a 450 splash on Kazarian while Angle has Daniels in an ankle lock, but only gets two. Kazarian soon gets a two count of his own. Angle and Daniels come in, but in a flash are back on the floor with Angle grabbing his groin. Daniels throws his appletini in Styles’ face and Kazarian rolls him up for the win.

Before the match Hulk Hogan demands police brutality if Aces & 8s interferes in the bout. Bully Ray then cuts a promo in the back and enters the ring. Hardy’s music plays, but Hogan comes out instead and proposes delaying the match until this week’s television show. Gee, TNA is really making these pay-per-views worth their price. Hardy finally comes out with his shoulder heavily bandaged. Hey, at least its not the first time that Hardy wrestled at a TNA pay-per-view despite being in no condition to perform! Bully goes straight for the shoulder and butchers Hardy until Ray misses a big splash. Hardy then gets in some offense and hits a twist of fate followed by a swanton bomb. Bully comes back with a Bully bomb, but only gets two. Hardy nails the whisper in the win, but misses a second one which is followed up by a Bubba cutter from Bully. No dice. Hardy comes back with another twist of fate then misses a swanton. Bully hits another Bubba cutter for two. Hardy then gets a third then fourth twist of fate and goes to the top to nail a swanton for three!