Home › Wrestling Clips › In the Middle of Trios Chaos

In the Middle of Trios Chaos

Above, Bryce Remsburg gives his final report on the 2012 edition of CHIKARA’s King of Trios Tournament. Included are interviews with The Throwbacks (Dasher Hatfield, Mark Angelosetti and Matt Classic aka Colt Cabana) and UltraMantis Black.

Since then the first night of the tournament took place. The results are as follows:

Team Ring of Honor (Mike Bennett, Matt Jackson and Nick Jackson aka The Young Bucks) defeated The Faces of Pain (Meng, The Barbarian and The Warlord)

I’m a little disappointed that some of the nostalgia acts won’t be advancing, but at least we got these awesome pictures out of it: 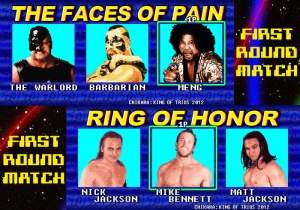 Since Jigsaw, Manami Toyota and Mike Quackenbush advanced last night I figured I’d post an old Podcast-A-Go-Go from last year’s King of Trios in anticipation of tonight’s event. Here, the team takes on Amazing Red and The Maximos/The S.A.T. (Joel Maximo and Wil Maximo) in a first round match. Gavin Loudspeaker is a bucket of excitement as always in hyping the match. Toyota gets a huge pop when she first comes in and kicks Amazing Red out of the ring. Meanwhile, Mike Quackenbush and Jigsaw show why they have been a team for so long.

If you are interested in reading further King of Trios results I will be tweeting tonight and tomorrow’s results @dcjohnson86.