If you ever wanted to see a match where there is garbage piled on garbage piled on garbage, but not spend a lot of time well then this one is for you! First, we have The Twilight Zone a tag team consisting of two masked guys named Nebula and Quasar. According to the ever reliable Wikipedia and Wrestlingdata.com’s entries here and here Nebula was portrayed by up and comer Brian Christopher and Quasar was portrayed by never was Tony Williams. Fortunately, Jerry Lawler’s son had just passed his eighteenth birthday because otherwise allowing him to have this gimmick would surely count as some form of child abuse. Next, we have Chris Champion (source: The Online World of Wrestling) playing Kowabunga, a horrendous ripoff of the Teenage Mutant Ninja Turtles. Finally and perhaps most disturbing of all we have Ken Wayne holding the short-lived USWA Junior Heavyweight Championship *shudder*.

As could be expected Kowabunga was the one most aimed at the kiddy audience and came with some vignettes such as this one, Splinter ripoff included.

Luckily, the creative team in Memphis limited how much they wanted to torture their audience  with most of their bad gimmicks. Accordingly Nebula, Quasar and Kowabunga were wished into the cornfield a brief time later. It is a shame the team’s booking didn’t have some kind of Rod Serling type twist. Like, the only way Memphis bookers could torture their audience is if their audience willingly paid money to see their product live, watched it on Memphis TV or tracked it down years later on YouTube. Oh wait… 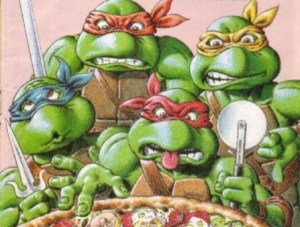