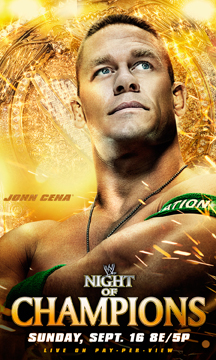 CM Punk and John Cena delivered in their match for the WWE Championship once again. There was no doubt that they would. Unlike SummerSlam (2011) the event was far from a one match show with Randy Orton/Dolph Ziggler in particular being good. Sheamus/Alberto Del Rio was surprisingly good even if the rivalry was stale months ago. Even the less exciting matches weren’t letdowns. Mostly, they were about as good as you’d expect them to be. Plus, JBL returned on commentary. With Punk just managing to retain, it will be interesting to see where the WWE goes with his title run. It could be The Rock’s title come the Royal Rumble, but who knows? Also, where will Brock Lesnar fit into all of this? While we ponder these questions here is what happened last night.

The Miz cuts a promo before the bout whining about defending the title against three opponents. Cody Rhodes/Sin Cara and Miz/Rey Mysterio pair off and it seems like a tag match, not surprisingly. Sin Cara and Mysterio soon face off and JBL substituting for Jerry Lawler hypes it as, “the first time in their history.” The interactions between Sin Cara and Mysterio are brief and disappointing. At least there is a nice spot where Miz powerbombs Rhodes while he is superplexing Mysterio. The four soon go on the outside and Sin Cara and Mysterio show off their high flying skills. Miz is the first to attempt his finisher, but Mysterio wriggles out of it and Miz gets a 619. The combatants trade a series of two counts. Rhodes tries to take off Sin Cara’s mask,but Mysterio saves him. Sin Cara takes out an extra mask and tries to put it on Rhodes, but Miz jumps him from behind. Miz gets the mask put on him instead and Miz blindly hits the skull crushing finale on Rhodes after Sin Cara gets put down and Mysterio is doing nothing. Miz wins.

Kofi and Kane start off. Wait. Kofi? Kane? Why does that sound familiar? It doesn’t last long before the partners are tagged and Daniel Bryan puts R-Truth in his corner, hitting some kicks. Truth makes it out and tags Kofi. The two double team Bryan for a while, but Kane soon comes in to battle the recently tagged Truth. Now, it is Bryan and Kane doing the double teaming. Bryan lays in some kicks that the crowd chants along with. After some more action Bryan and Kane start shoving each other until Bryan asks Kane to hug it out. Kane accepts and Truth tags Kofi in who gets the boom drop on Bryan. Kane rescues Bryan, but gets kicked down by Kofi. Kofi flips out of the ring onto Kane. Kofi re-enters and gets put in the no lock, but Truth makes the save. The match ends when Kane comes back in and Bryan nails him off the ropes. Kane lands on Kofi and becomes a champion. The new champs appear backstage later with AJ Lee and Dr. Shelby and Kane proclaims he is going to Disneyland after dumping Gatorade on all three.

Cesaro’s word of the day is “unfair” in reference to the title match even though he is rested and Ryder had to win a pre-show battle royal to be on the card. Cesaro further heels it up by rubbing Ryder’s face in the mat to start. Cesaro keeps the punishment going and stomps Ryder into the mat. Cesaro gets a nice spot in where he tosses Ryder into the air and hits a European uppercut. Ryder comes back and signals for the broski boot, but Aksana pulls Cesaro out. The big European comes back in and hits the neutralizer to retain.

Randy Orton knocks Dolph Ziggler off his feet first with a shoulder block. Ziggler hits a swell looking dropkick and gets a two. Orton fights back with some European uppercuts utilizing them the same way he used to utilize chinlocks…a lot. Orton switches it up by getting in his trademark powerslam and attempting his DDT through the ropes, but Ziggler escapes. Ziggler is the first to go aerial by hitting a missile dropkick off of the second rope. The two then trade fists until Ziggler bounces Orton’s head off of the ropes and follows it up with some elbows. Ziggler puts on a chinlock and twists his body upside down to increase the pressure. That is some rest hold! Orton gets a belly-to-back suplex on Ziggler to get out. Ziggler hits a clothesline and gets a two count before going back to a chinlock. Looks like he read Orton’s 2005 playbook. Ziggler hits a blond ambition after a while, but only gets two. The two go outside and Orton throws Ziggler hard into the barricade. Orton then hits a DDT off of the barricade and rolls Ziggler back in for two. Orton attempts an RKO and Ziggler counters by rolling him up for two. Orton then blasts Ziggler with an RKO to end it. In an odd way I liked it.

Eve Torres rolls Layla up for a quick two count, but gets put in a headscissor’s submission for her trouble. Eve plays possum after some shots and tosses Layla outside for some pain. The two re-enter for some very slow action until Layla picks the pace up with some clotheslines. They are no use because Eve hits a rolling neckbreaker to win the title.

Right before the match Booker T. announces that the brogue kick is re-instated. Sheamus responds by attempting a brogue kick as soon as the bell rings, but Alberto Del Rio dodges it and Sheamus hits David Otunga instead. A lot of brawling to begin with and Del Rio gains the upper hand after he dodges (yet again) an attack from Sheamus and the big Irishman lands on the commentators’ table. Del Rio punishes Sheamus by using various submission holds on his arm. Sheamus hits some high speed moves, but keeps clutching his arm. Sheamus pounds on Del Rio’s chest in what JBL calls, “an old fashion Irish beat down.” Shortly, Sheamus hits white noise and signals for the brogue kick. He doesn’t hit it. Del Rio attempts the cross armbreaker after kicking Sheamus in the gut, but Sheamus counter it and attempts a Texas cloverleaf. Del Rio goes back to the arm and locks on the cross armbreaker. Sheamus powers out of it, but Del Ro locks it back on after a brogue kick attempt. Sheamus reaches the ropes. Sheamus then manages a brogue kick to retain. Not bad, but can the rivalry end now?

Paul Heyman hypes up the length of Punk’s title reign and Punk being a Heyman guy before the fight. Punk holds the title up for a long time before the match to psych Cena out. As the match unfolds Michael Cole rambles on about the “polarizing John Cena.” I guess that is a nice way to say that his home state hates him. Punk gets a two count with a DDT early on. After some holds Cena rolls out of the ring grabbing his leg even though Punk had been targeting his upper body. Punk comes out with a suicide dive onto Cena and looks at Cena’s dad in the audience. Nothing comes of it. Cena gains control by hitting a fisherman suplex variation on the floor. Punk grabs the game ball when they come back in and he puts Cena in a camel clutch, which Cena lifts himself out of. Punk attempts a go to sleep, but Cena gets out of the position and hits CM with a shoulder block. Cena nails a right hook and gets a long two count. Cena signals for the five knuckle shuffle, but Punk kicks him in the face. Cena quickly gets punk in position for the attitude adjustment, but Punk rolls out onto the floor. Cena hits a suicide dive. I never thought I’d type that. Back inside Cena tries another five knuckle shuffle, but Punk turns it into an anaconda vice. Cena reverses it into an STF and Punk reverses that into a crossface. Cena powers out and the two are on the mat for a breather. It is a short one and the two start slugging it out again. Punk hits a big elbow from up top. Soon Punk attempts the go to sleep on Cena, but Cena grabs Punk’s leg and puts him back in the STF. Punk reaches the ropes and nails the go to sleep. Only a two count. The pace slows down until Cena finally hits the five knuckle shuffle and the attitude adjustment…for two! Cena goes up top for a legdrop and Punk dodges it. Punk gets a two count with a roundhouse kick. Punk goes up top for a moonsault and misses it. Cena tries the attitude adjustment again, but they swap spots and Punk levels him with the go to sleep…for two! Punk hits a Rock bottom…for two! Punk looks frustrated and Cena wallops him with an attitude adjustment that Punk kicks out of. Punk goes back to the top rope and Cena hits a top rope German suplex for the win! Wait! The ref says both men’s shoulders were down. It is a draw! Great match! Also, Punk nails Cena with the belt to end the show.