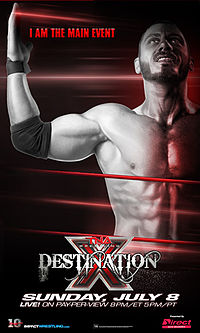 TNA Destination X (2012) gave a chance for some new stars to shine, which was a nice change of pace from a lot of TNA’s pay-per-views this year. The main event offered an entertaining match even if with the talent involved, Austin Aries and Bobby Roode, the encounter could have been better. Also, AJ Styles took on Christopher Daniels in a match that has been done to death. Even though Styles and Daniels has been done more often than most can count it was still a great showing and at least equally as good as the main event. On the downside the Ultimate X match wasn’t nearly as good as it could have been and some of the qualifying matches left a lot to be desired. Overall the show had more tasty treats to give than offerings that would leave sour tastes in the mouths of viewers.

Mason Andrews defeated Dakota Darsow, Rubix and Lars Only in a fatal four way to qualify for the TNA X Division Championship Tournament

Before this fight Mike Tenay announced that Jeremy Borash will be substituting for Taz on commentary. This night is starting off underwhelming. Darsow begins by looking good…for a second. Darsow quickly gets dumped out of the ring by Andrews. Andrews and Rubix exit as Darsow comes back in after a while and really lays his boots into Only. Darsow knocks Andrews and Rubix off the apron as they try to re-enter. A while later Andrews takes a sick dive onto Darsow and Only, bur this gets overshadowed by Rubix’s even sicker dive. Andrew gets the final laugh after he puts Only in a fireman’s carry and slams him down with a bulldog.

Andrews celebrates briefly, but turns around to be attacked by Kid Kash. Andrews has no down time and will have to defeat Kash if he wants to advance. Kash beats the tar out of Andrews until Andrews rebounds slightly with two dropkicks. It is not enough and Kash stays dominant until Andrews holds his knees up when Kash attempts a moonsault. The two go back and forth until Andrews defeats Kash with a schoolboy.

Williams starts off with a headlock that begins a slew of mat wrestling. Williams is not in charge long because he is soon out of the ring and King twists over the top rope to the outside and lands on Williams while he is taking a breather. The two hit a variety of impressive moves including a flying European uppercut and a high knee from the top rope to the floor by Williams and a blockbuster off the ropes from King. Yet, there is no rhyme or reason for most of the moves. In the end King wins it.

An amazing amount of dropkicks from both wrestlers opens the match. After one dropkick Sonjay rolls out of the ring and Rashad flips over the top rope onto him. Dutt hits an impressive move when he knocks Rashad onto the mat so that his head is sticking out past the ropes and then Dutt slingshots over the ropes to the outside delivering a legdrop. Later on Sonjay finishes him off with a backflip off of the top into a double stomp.

Jesse Sorensen gave an update on his status after suffering a broken neck in a match with Zema Ion. Zema interrupts Sorensen as he is leaving and gets some massive heel heat. Zema begins the bout by getting in control for a while until Flip holds up his knees when Zema tries a moonsault from the second rope. As can be expected Flip does a ton of flippy stuff, but Zema responds by just dumping him on his face for the pin.

Samoa Joe hits the first big spot of the bout by back dropping Angle outside and following up with a suicide dive. Joe soon attempts a muscle buster, but gets a headbutt and a dropkick from Angle from off of the top instead. Angle eventually manages three rolling German suplexes, but it tires him and Joe nearly hits the muscle buster. Joe attempts the muscle buster a third time and hits it, but only gets two. The fight continues until Joe makes Angle pass out with a rear naked choke. Joe earns 10 points in the Bound for Glory Series.

Daniels dodges Styles early on and spits in his face. Styles gets his hands on Daniels and strikes him hard. Daniel fights back with some blows of his own. A chair is the first weapon to come into the math when Daniels plows Styles onto one. Daniels continues the punishment by punching AJ in the head until he blades. Styles fights back and bounces Daniels head off of the ring steps. Daniels blades and the blood really becomes noticeable as the two fight up the entrance ramp. AJ attempts a Styles clash, but Daniels reverses it with a back body drop. AJ flips off of a part of the set and reverse DDTs Daniels. The ref begins a 10 count, but Kazarian comes out of nowhere and pushes AJ off of the stage. Daniels and AJ rise and AJ comes back by taking care of Kazarian. AJ then ends the match by giving a Styles clash to Daniels off of the stage and through a table.

Zema gets shot into a corner and gives elbows to his opponents as they charge him. Zema goes up top and gets a triple dropkick from his foes. Sonjay gets taken out of the match with a possible injury as the action continues. There is no time to grieve as Andrews jumps over the top rope onto Zema and King. Zema goes for the title, but gets tackled down by King. Sonjay sneaks back into the match and all four go after the title. Andrews and King fall off while Sonjay and Zema fight at the very top of the Ultimate X structure. Zema sprays Sonjay in the face with his hairspray and grabs the belt.

Some good back and forth action to begin as Jeremy Borash talks up their respective diets for some reason. Roode really gets an advantage when Aries misses a dropkick from the top rope and Roode puts his boots to him. Aries fights back and almost gets on the last chancery. However, Aries makes another mistake when he attempts a suicide dive and eats the guardrail. Back inside Aries starts selling an injury to his arm. Roode keeps working him over and insults him by saying, “you’re not even in my league.” Aries Hulks up and no-sells a ton of offense. Aries hits the suicide dive and the top rope dropkick that he missed earlier. Aries’ momentum stops when Roode catches him with a slam. Roode goes after Aries on the mat…but gets put in the last chancery. Roode reverses it into a crossface that gets reversed back into the last chancery. The hold gets broken and Aries goes for a 450 splash that misses. Roode gets in a spinebuster on Aries for two and goes after Aries’ arm. A little later the ref takes a bump and Aries gets hit with Roode’s belt for the pin…and Roode only gets a two count. Aries gets up and soon finishes the match with a punt to the head and brainbuster. Aries now has the TNA World Heavyweight Championship!