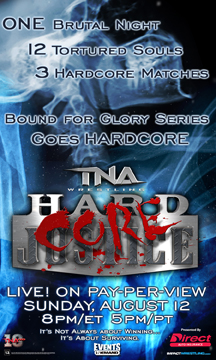 TNA Hardcore Justice (2012) was just above the middle of the road for recent TNA pay-per-views. It wasn’t the best production by a long shot, but certainly above average quality. Austin Aries and Bobby Roode continued to not live up to the potential an Aries/Roode encounter could be. Yet, they still gave a great performance. The first two Bound for Glory Series matches were so-so, but the final one featuring AJ Styles, Christopher Daniels, Samoa Joe and Kurt Angle more than delivered. Everything else was just kind of there, but at least there were no stinkers. In the end the show did a good job of developing existing feuds and creating anticipation for what Austin Aries will do next.

Not a bad opener that sees the team of Chavo Guerrero and Hernandez in their first pay-per-view encounter. Chavo does a good job of hiding Hernandez’s weaknesses, which proves that Hernandez is best suited for the tag business. Hernandez gets in his usual plancha and pops the crowd with shoulder blocks on Gunner and Kash. Still, not seeing Homicide in his corner really makes me miss LAX.

The winner of this bout will receive 20 points in the Bound for Glory Series. D’Angelo Dinero was supposed to be in this match, but when Dinero’s music plays no one comes out. A video is then shown of Aces & 8s taking out Dinero by slamming a door into his arm. RVD is in the ring already and looks on at all of this before his opponents, Mr. Anderson and Magnus enter. Mr. Anderson eats a frog splash in this match and Magnus is surprisingly forceful. He even drops an f-bomb when looking for a chair to attack RVD with. When Magnus finds it RVD just kicks it right back in his face and grabs the win.

The shortest match of the night so far and it is not surprising. Devon and Kazarian’s styles don’t exactly compliment each other and the outcome is predictable since Kazarian is not getting a two titles simultaneously-type push. Kazarian takes a spinebuster after a fade to black attempt and Devon celebrates the pin.

Before the match a recap video is shown of Madison Rayne’s crush being revealed as…Earl Hebner. Lame! During the video Hebner is shown wearing Bret Hart glasses and mocking an audience. Yes, Hebner still hasn’t gotten over the Montreal Screwjob. Combine that with TNA’s tendency to beat a dead horse and we’re in for trouble. At least the in-ring performers are both competent and Tessmacher is really beginning to earn her spot as the top knockout. It’s a shame that she doesn’t get to show it here. In under six minutes Madison rolls up Brooke and keeps her down by holding on to the ropes. Great, another screwjob angle.

Whoever emerges as the winner of this battle will earn 20 points in the Bound for Glory Series. This is a meh match, which is disappointing given that two of the innovators of the TLC match are in it. Plus, James Storm and Robbie E are solid performers in their own right. There is a botch early on when Bully is almost suplexed through a table by Storm and Hardy. Robbie moves it out of the way, but not fast enough so Bully breaks off the edge of the structure. You can tell it’s a botch because of the way Mike Tenay and Taz keep going over how a participant has to go through a table in order for the ref to decide a winner. Aces & 8s make their second appearance of the night when they cause a distraction that leads James Storm to hit the last call super kick on Hardy. This continues the speculation that Storm is tied to the heel stable. The distraction is not enough though because Bully comes back and powerbombs Hardy through a table to win it.

King takes an early lead in this fight and even sends Zema to the floor after a shot. There are plenty of high flying spots in this bout for fans of flippy action including Zema avoiding one moonsault from King only to be met with another one. In the end Zema brings it back to basics by planting King on his face and picking up the three count. It is the best match of the night so far and Zema/King have great chemistry. It would be swell to see these two lock up again in  a couple of years after they have really fine tuned their respective skill sets.

As with the two previous matches the winner of this one gets 20 points in the Bound for Glory Series. Now, look at the names involved. Was there any doubt that this would be the match of the night? Joe looks like a beast early on, but before long he takes one in the gut from Daniels who gets too cocky. Joe pays him back with a slam on the ladder. The most entertaining part of this encounter though was when Joe and Angle took turns just destroying Daniels. First they do it by trading suplexes and then move on to actually sticking Daniels between the ladder and punishing him. They can only have so much fun with their cue ball headed opponent though and soon they are fighting on top of the ladder for the clipboard that hangs above. Joe wins the scuffle, but out of nowhere Styles springboards onto the ladder and snatches the prize.

There are two important parts to the story leading into this match. The first is that since losing his title to Aries the previous month, Roode has been constantly berating his opponent and calling his victory a fluke. The second part is that Aries put the stipulation forward that regardless of who loses there will not be a rematch. The bout is not as good as their pay-per-view encounter the previous month, but the last few minutes are great. First, after a ref bump Roode is declared the winner after he superplexes Aries off the top rope and the two men cradle each other. With two refs counting, one says that Roode’s shoulder came up and the other says that Aries’ shoulder came up. Senior official Earl Hebner comes out and decides that the match will be restarted as Roode is holding the title on the floor and is ready to leave. As soon as the bell rings Aries comes out with a suicide dive and knocks himself out by hitting the title. Roode rolls him in and attempts to pin him, but Aries just manages to wake up and kick out. Aries is then able to roll up Roode to retain.

Like Loading...
‹ The Crush Gals Get Crushed by The Jumping Bomb Angels
The Crazy Chickens in a Classic ›