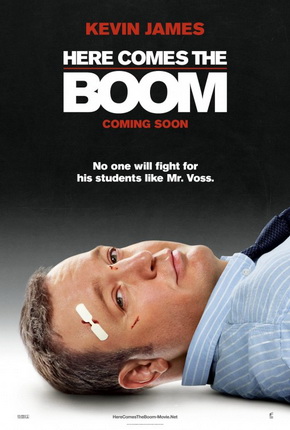 As much as I would have enjoyed tearing apart Kevin James’ latest feature film I just can’t do it. While the movie didn’t have any belly laugh moments it does offer some chuckles and director Frank Coraci does a good job of keeping the story on track and nearly believable.

James plays Scott Voss, a 42-year-old uninspired and out of shape biology teacher with an amateur wrestling background. Voss becomes motivated when he learns that the nicest guy in the world, Marty Streb (Henry Winkler) is going to get fired from his position as the school’s music teacher after he just found out that his wife is pregnant.

Voss goes unrealistically out of his way to make enough money to pay for the school’s music program. First he tries working a second job by teaching a citizenship class, but makes barely any money doing this. Yet, during this time he meets Niko (real life former UFC Heavyweight Championship holder Bas Rutten), an immigrant, who used to be an MMA fighter. Voss discovers Niko’s past prior to a tutoring session and he learns that he can make big money doing MMA, even if he loses.

What prevents this movie from being totally cringe worthy is how delicate the fight scenes are handled. To give full disclosure I’m by no means the world’s biggest MMA fan. Heck, for years I’d throw out some variation of the line, “watching one guy sit on another guy’s face for five minutes isn’t my idea of a good fight.” Still, even I was worried that watching Kevin James, a man who clearly resembles Mr. Potato Head fight inside an octagon could only be ridiculously bad. Well, unless it was played way over the top, which it wasn’t. The storytellers behind this film must have recognized this fear too. The first time James is in the ring he gets sent to the hospital after a kick to the head from another out of shape guy with a Dusty Rhodes-esque splotch on his chest. So it’s not like Voss is kicking ass from the start.

During his early venture into the sport, the cliché love story between school nurse Bella Flores (Salma Hayek) and Voss begins to develop. This is the same hunk of fat love story that just about any guy would like trimmed from many, many action/sports movies, but nonetheless has to be put up with. At least James and Hayek have some chemistry, which makes it a little less painful. There is also another cliché subplot of a promising student (Filipina pop star Charice) wasting her potential until the teacher helps her overcome her problem with a controlling father. Again, unnecessary to the main story, but one that any audience member would expect to be there.

Voss keeps training with Niko and wins his first fight after which he immediately vomits on his opponent. Well, this movie needed some gross out comedy, didn’t it? Voss’ determination finally gets him to the point where he can just about save The Fonz’s job when tragedy strikes and all the money that he had been building up is lost. Luckily, by this point Joe Rogan has already made his cameo and offered the protagonist a fight in the UFC. If Voss wins he will earn $50,000, which is more than enough to keep that troubled high school music program going.

This last fight is when the movie comes apart somewhat. Having Voss gain momentum in the world of underground MMA in the course of the film’s loose timeline is one thing, but having him challenge a top competitor at the sport’s highest level is another. They make Voss’ opponent Ken Dietrich (played by Krzysztof Soszynski, another real life fighter) look like a complete beast that anyone who resembled James would have no shot against. Still, Voss manages to go toe-to-toe with him. Oh well, I guess it would be anticlimactic if Voss got his arms torn out of their sockets in the first round.

Overall, while Here Comes the Boom is a by no means a classic on par with Rocky or The Wrestler it manages to avoid the trend of being just another awful Kevin James movie. It is worth a look, preferably through a Redbox rental because repeat viewings may not do it any favors.