Thank you for your bandwidth. I just love staring at that fuckin’ dinosaur in the banner. Speaking of dinosaurs, we all remember Rodney Anao’i aka Yokozuna, right? 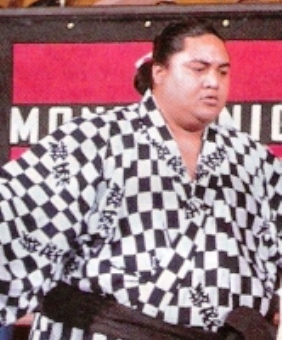 Yokozuna was 555 lbs when he debuted. This would be his lightest weight in the WWF. As his tenure progressed, Vince McMahon wanted him to be less of a figurative monster and more of a literal one. Yokozuna just wasn’t big enough, so Vince somehow convinced him to put on an extra 200  lbs. No, I am not making this shit up. Yokozuna was upwards of 650 lbs the last time we saw him in a WWF ring (which was the pre-show for SummerSlam 1996, in which he pulled the top rope off the buckle when he climbed up to deliver the Banzai drop to his opponent, the 1996 King of the Ring, “Stone Cold” Steve Austin.

So yeah, he was big. Big enough that WCW tried to sign him away during those Monday Night Wars we keep hearing about, but never have really seen since Vince pretty much publically executed WCW while staring down every other wrestling promoter in the world with a grin on his face. So we probably won’t ever see a time in pro wrestling where two companies of equal stature bid for each other’s wrestlers so vigorously, they’ll even try to get people to sign via phone call. Major League Wrestling (MLW) got this out of Konnan on an episode of MLW Radio.

“One time Scott [Hall] was with (Eric) Bischoff and he [said to Yokozuna], ‘Man Bischoff is right here. Let’s make this happen.’ Yoko said, ‘I don’t roll like that. You don’t just put someone on the phone and tell me to sign.’ He got offended and he never came in,” he said.

That’s right. Eric Bischoff tried to sign Yokozuna via telephone. However, Rodney was loyal to Vince McMahon as half his family cashed paychecks signed by Vinnie Mac at some point in their lives (remember, every Samoan in wrestling is related, he’s cousins with The Rock and Rikishi.) So Yokozuna had no intentions of jumping ship. But what if he had?

Konnan continued, “Yoko was gangster. I went to L.A. with him once and he was like the godfather of South Central. He was telling me stories about him sneaking drugs through airport security. He was well connected. He was a gangster. I looked up to him a lot. He loved my character in the nWo and we were actually going to get him to come in as a Samoan gangster and have my back.”

Go Google “BSK WWF 1995” and see if there’s any truth to that or not. And then take a moment to un-shit yourself at the thought of it. Now, while you’re changing into clean underwear, let’s think about Yokozuna…a legit gangsta…going into a sleaze-ball company like WCW…to play a legit gangsta. We all know where this was going to go: UP IN FUCKING FLAMES. IF the worst happened and Yokozuna found himself working for WCW, you really think that any of the bullies and politics would have worked on him? He’d had experience dealing with Hulk Hogan before, and Lex Luger as well. You think Eric Bischoff was going to be the one to tell him bad news? What if he and somebody like Scott Steiner had a go in the back? What if he and somebody like Scott Steiner had a go DURING A MATCH?

Just saying…WCW was NOT a well-oiled machine. It’s a good metaphor really. WWF is the nice suburb of Greenwich, while WCW was the worn down ghetto of Atlanta. The grounds were very fertile there for anything to happen, and Yokozuna was the guy that could have done damn near whatever he wanted to…or, whatever he had to. Maybe he would have formed his own crew.

Maybe Yokozuna in WCW wouldn’t have been so bad after all.