He’s arrogant, provocative and incredibly charismatic. He is Conor McGregor.

If you locked TNA wrestler Rockstar Spud in a dungeon, forced him to work out, fed him nothing but PCP then entered him in a real life version of the movie Bloodsport you might get something close to Conor McGregor, but not quite. After all he still wouldn’t be Irish.

McGregor is a unique and dominating force in the octagon and on the mic so much so that during UFC 180 he was a major talking point for commentators Joe Rogan and Mike Goldberg in a fight he had nothing to do with: Ricardo Lamas vs. Dennis Bermudez.

Rogan and Goldberg played up Lamas and Bermudez’s trash talk, claiming McGregor’s attitude was infectious. Whether there was legitimate animosity is debatable, but Lamas shocked Bermudez with a first round submission. Of course it would have looked even more impressive if there weren’t three other fights on the card that ended in the first round, but I digress. McGregor has a magnetism to him that most pro wrestlers, heel or face, could only dream of. This kind of aura also makes him a target

So who is going to be the one to finally shut McGregor up? Let’s take a look at McGregor’s would-be rogues gallery (would-be because McGregor is too much of a loudmouth to classify as a hero who would need a rogues gallery).

Whether Dennis Siver will be the one to shove McGregor’s foot in his mouth remains to be seen, but he’ll be the next to get a chance at it. Scheduled to battle McGregor at UFC Fight Night in January 2015, Siver comes off a unanimous decision win over Charles Rosa. Earning the UFC Fight of the Night, this 35 year-old Russian-German 10 year veteran could make a much bigger name for himself with a win over the talkative Irishman. Certainly, Siver has come a long way since fighting in comparatively small venues in Germany and Sweden. That being said Siver doesn’t have the most impressive record with 9 losses, with three fairly decisive ones happening in the past five years.

UFC could tell an excellent story in the build up with Lamas being the one to step up to loud mouths. Lamas has the personality of a soiled sofa seat so anyone looks more charismatic than him by comparison. Dennis Bermudez was no exception and came off like a captivating jerk leading into their fight despite Lamas having “The Bully” as his nickname. Up against Lamas, McGregor will look like the devil himself. This fight is a no brainer. On top of their polar opposite personalities UFC ranks Lamas fourth for featherweights and McGregor right below him. Lamas stands a good chance at being the one to put the kibosh on McGregor. He may not have nearly the momentum McGregor has been collecting, but Lamas’ only loss in nearly four years came at the hands of UFC Featherweight Champion Jose Aldo. And that was only by decision when Lamas went to the limit with Aldo after five rounds.

On July 6, 2013 Cub Swanson won by TKO for the third time within 18 months. Since then Swanson has yet to achieve another TKO, but I bet he’d like to add McGregor to his list of victims. Before he has a chance to do it, Swanson first has to go through Frankie Edgar at the next UFC Fight Night. If he can get passed Edgar, which is by no means a given, he could soon be the next UFC Featherweight Champion. Swanson would then become the target for McGregor. Having to possibly fight Aldo and McGregor within a year or so? It’s tough to be envious of Swanson, but if he defeats those two he’ll be well on his way to legend status. 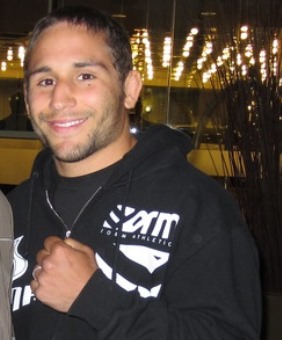 When Chad Mendes recently questioned McGregor’s wrestling ability, the quick witted Irishman came back with “I could rest my balls on your forehead.” If these two fight it’s going to get nasty and I’m not just talking about the pre-fight interviews. Mendes was Aldo’s latest challenger and while he didn’t walk out victorious like Lamas he went the limit with the champ. Unlike Lamas, Mendes would be undefeated in his professional MMA career if it were not for his two fights with Aldo. While Aldo seems to have Mendes’ number time will tell if McGregor does.

If McGregor gets a shot at the UFC Featherweight Championship, Jose Aldo is almost certainly the man he will face. Why is that such a sure thing? Because the last time Aldo didn’t get his hand raised after a fight was on November 26, 2005. If McGregor is on a hot streak than Aldo is having a streak in danger of incinerating the planet. Just think of Aldo’s contemporaries with winning streams. Names like The Undertaker. No! Scratch that. I forgot, we’re talking about MMA here. Anyway, names like Jon Jones, Georges St. Pierre, even Anderson Silva before Chris Weidman put an end to him, all had their streaks start after Aldo’s. Even more impressive than the names are the shear numbers. Over a nearly 10 year period Aldo holds a record of 18 wins, 0 losses. Those 18 wins include 6 TKOs. To McGregor’s advantage though he has a longer reach, taller height and is even slightly younger than Aldo. Oh yeah, McGregor also is no stranger to winning by TKOs having racked up 10 of his own in less time.

Regardless of who knocks McGregor’s mouth shut, let’s hope this Irishman’s momentum continues for a while. The guy is just too entertaining to watch.