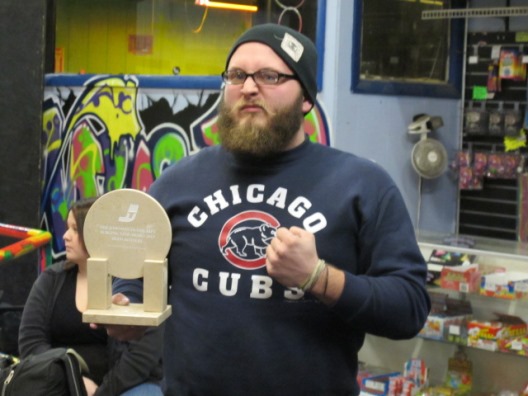 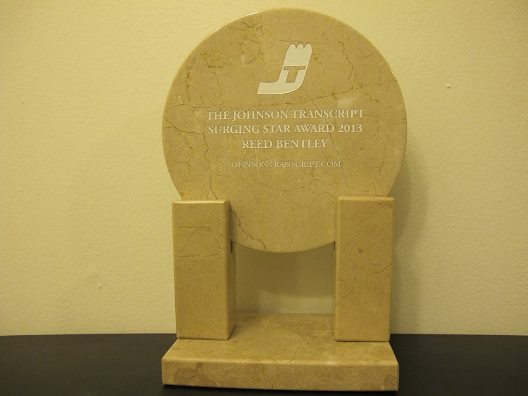 Greetings wrestling fans! After a long delay, voting for The Johnson Transcript Surging Star Award for 2014 opens tomorrow! As such I thought it would be nice to post about last year’s winner of The Crown J, Reed Bentley.

As shown above the physical award for The Johnson Transcript Surging Star Award aka The Crown J was presented to Reed Bentley on January 22, 2015 in Clarksville, Indiana at Jammer’z Rollerdrome. Later in the night Bentley would be featured at IWA: Mid-South Reckon1ng at the same venue.

The award was given to Bentley in recognition of his 2013 work. In 2013 Bentley performed for a variety of promotions including Dreamwave Wrestling, AAW: Professional Wrestling Redefined, and St. Louis Anarchy (SLA). Outside of these promotions Bentley started the year off strong by venturing to Philadelphia, Pennsylvania, where on February 2, 2013 he wrestled in the opening match of National Pro Wrestling Day 2013: Evening Show. Bentley also held gold during the year by winning the Dreamwave Wrestling Alternative Championship.

Since winning The Crown J for 2013 with 23.58 percent of the vote, Bentley has cemented himself as a main event attraction for IWA: Mid South. At the IWA: Mid-South 19th Anniversary Show, Bentley defeated John Wayne Murdoch to win the IWA: Mid-South Heavyweight Championship. Although IWA: Mid-South is where Bentley appears most frequently he continues to have success in other independent promotions. Bentley recently made his debut for Full Impact Pro (FIP) where he wrestled in the FIP Fallout 2015 Six Man Tag Team Tournament at FIP Fallout 2015: Night 1 and FIP Fallout 2015: Night 2. Bentley also claimed gold multiple times last year at Evolution Pro Wrestling (EPW) where he has had a lengthy run with the EPW Elite Championship and two brief stints with the EPW Openweight Championship.

Looking to the future: Voting for The Crown J for 2014 will at last open tomorrow! It will be held from October 31 to November 30. For eligibility requirements see the criteria below. The criteria was first designed in 2012 and remains the same despite the voting dates being moved.

*The performer who wins this award must never have been under contract to a company commonly understood as one of the top two promotions in the United States in the year that the award has been designated for. If a company falls out of what are commonly understood as the top two spots then a signed performer of that company could be eligible for the award in subsequent years, but not in a year where the company was a top two company. For example, if one company becomes the number three company in 2014 then a performer signed to that company would not be eligible to earn an award for 2014. However, if the company stays at the number three spot throughout 2015 then a performer signed to that company who meets the other criteria would be eligible to win the award for 2015.