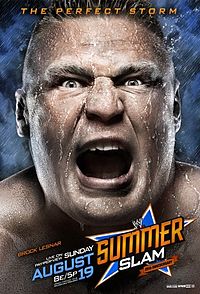 WWE SummerSlam 2012 had a couple of great looking matches going into it. No, really it was just a couple. Okay, maybe putting Chris Jericho/Dolph Ziggler in there to kick the show off makes three. HHH and Brock Lesnar’s fight had the best build and it is difficult to put on a bad CM Punk/John Cena match these days. The WWE tried by throwing The Big Show in there, but it was still pretty entertaining. Theaformentioned Jericho/Ziggler of course delivered and the rest of the show was okay with the exception of Sheamus/Del Rio. The feud was stale going in and their match just made it more obvious that Sheamus should be moving on to a new challenger. Anyway, here is a closer look at WWE’s summer spectacular.

Ziggler plays a convincing threat to the more experienced and crafty veteran, Chris Jericho. Jericho doesn’t look his age though and even manages a sick hurricanrana on Ziggler. Ziggler gets in some offense as well, but it is just a matter of time before he is trapped in the walls of Jericho. The way Jericho applied this submission reminded me of his WCW days as he really stretches Ziggler in a painful looking way.

Kane hits a sweet looking dropkick to Daniel Bryan’s face. It is not long before Bryan hits a dropkick of his own…from off the top rope. Kane dominates a lot of the bout, but Bryan hits two absolutely lethal looking kicks. Bryan makes a mistake when he goes upstairs for a diving headbutt and misses. Kane hits him with a chokeslam and signals for the tombstone piledriver, but Bryan ends up getting out of the deadly move and steals the bout with a small package. At just over eight minutes the bout is way too short and Bryan is wasted here.

Rey Mysterio comes out in one of his crazy costumes. This time it is a Batman outfit. The dark knight doesn’t rise here though he delivers some pain to Miz even feeding him a 619 at one point. Mysterio messes up and Miz avoids a top rope maneuver. I guess he should have picked a superhero that could fly. Mysterio’s final mistake comes when he charges Miz only to scream right before nailing one of the turnbuckles. Ever the opportunist Miz plants Mysterio with the skull crushing finale for the easy win.

Before this bout there is a backstage segment featuring Punk and AJ Lee. It is lame even though Punk tries his best. A small Mike Chioda chant (that must have come about because he just entered the ring off camera) gets a louder response than anything in this scene. Moving on Sheamus looks like a beast in this match and at on moment lifts Del Rio up while he is applying the cross armbreaker in a maneuver that is tough to believe. Sheamus then follows up with white noise, but only gets a two count. Ricardo attempts to help out Del Rio by tossing him his shoe, but Sheamus grabs it and gives him an Irish curse for the three count even though Del Rio’s foot was on the rope.

Kofi Kingston and Titus O’Neil have some great chemisty in a David vs. Goliath sort of way. Darren Young comes in at one point and schoolboys R-Truth for two, but that is about as close as the Players ever come to wearing the straps. Truth soon makes the pin after he DDTs Young and picks up the victory.

CM Punk debuts his Bret Hart attire in this match. Punk and Cena attempt their finishing moves on Show early in the encounter, but neither has any luck. Later on Show taps out to a double submission that looks sloppy as heck. Cena uses the STF on him and Punk wraps his legs around his head. AJ Lee comes out and prances to the ring before ordering the match be restarted. Punk drops the line, “Do the right thing like Spike Lee” at this point. I love that movie! Anyway, Punk and Cena turn around to get a double chokeslam from Show. Show covers Cena then Punk for two. Cena wallops Show with the attitude adjustment for the sure victory. Punk has other plans and swoops in, throwing Cena out of the ring and stealing a win.

Since there is no buffer match between the contest for the WWE Championship and the main event fight, there is a whole slew of filler shown. This allows the audience a chance to cool down, but also means a lot of crap. First, the celebrities in attendance are shown including Piers Morgan, Fred Durst (who flips off the camera and has to be bleeped), Rick Rubin, David Arquette (who holds up a replica of the WCW World Heavyweight Championship) and Maria Menounos (who is wearing a Bob Backlund shirt in an attempt to get more undeserved attention from the WWE). Up next a trailer is shown for the new WWE Studios movie, “The Day.” Then it is back to some wrestling, but only for a few second as clips are shown of Antonio Cesaro (with Aksana) defeating Santino Marella for the WWE United States Championship. That was left off the card, but Kevin Rudolf wasn’t. He performs a set with a social media backdrop and the divas come out and dance along to the music. It is lame as can be, but at least it’s not as bad as the garbage that Cee Lo gave us last year. Finally it is back to wrestling and HHH lets us know it. After knocking Lesnar outside he bellows, “WWE not UFC.” Lesnar comes back and slams HHH on an announce table while holding his arm. He is really heeling it up and working on HHH’s injury. Lesnar takes some stiff shots to the face from HHH and is quickly bleeding from his nose. If it wasn’t a full out brawl already then Lesnar turned it into one after he tipped over an announce table and jumped off of it, giving HHH an axe handle on the way down. HHH works Lesnar’s stomach and the commentators play up Lesnar’s past health issues concerning his tummy. At one point HHH really punishes Lesnar by sending him gut first into an announce table. Not too long later, HHH hits a pedigree, but Lesnar kicks out. Lesnar comes back and plants HHH with his F5 finisher. HHH kicks out, but then Lesnar clamps on the Kimura lock. HHH sells the pain like crazy, but he reaches the ropes. HHH delivers another pedigree, but when he tries to pin Lesnar he gets trapped in another Kimura lock. This time he is in the middle of the ring and is forced to tap.