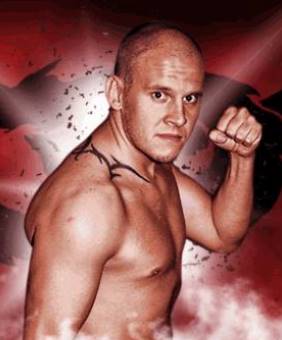 Interviewer’s Note: “The Fighting Spirit” Derek Ryze currently wrestles for DGUSA and has appeared for a variety of other well known independent promotions including FIP, ECWA and Beyond Wrestling. Trained by Abel Adams, on October 25, Ryze will officially be a 10 year veteran of pro wrestling. Although Ryze has recently been recovering from an injury to his right knee his current home promotion, the Southern Wrestling Association (SWA) will be having a show on November 16 in Forest City, North Carolina, which will feature indie sensation Jonathan Gresham. Ryze can be found on Twitter here. This interview was completed on October 12, 2013. In this interview Ryze and I focus on his DGUSA career.

Daniel Johnson: In a nutshell how would you describe yourself as a performer?
Derek Ryze: I like to see myself as a Chris Benoit performer. Always giving 110 percent.

Daniel Johnson: For those unfamiliar with you where and when were you born and how long have you been wrestling?
Derek Ryze:  I was born in a small town called Hudson, North Carolina. I’ve been wrestling almost 10 years. Actually it’ll be 10 years October 25 and I’m in my twenties.

Daniel Johnson: When you knew you wanted to become a pro wrestler how did you go about finding a place to get trained and what did a regular day of training look like?
Derek Ryze: When I saw matches between Ric Flair and Sting as a kid. I went to a local indie show close to me and talked to the owner. A normal day of training was we’d go twice a week at 6 p.m., run the same drills over and over until we got it right. We’d have some q and a time with our trainer also.

Daniel Johnson: Who was you primary trainer and how long did he train you for before you had your first match?
Derek Ryze: It was Abel Adams, the group of four that I was in started in October and not to sound ego-like, but we progressed greatly enough for us to have a match at the November show.

Daniel Johnson: Do you remember your very first match at all? If so what was it like and what most stands out from it for you?
Derek Ryze: Oh yeah, it was a fatal four way. I remember the day of the show our trainer had us do the match in front of the boys what seemed like a million times and said if we messed up, for a lack of a better term, he’d f us up if we messed up. Then to our surprise Abel was our special ref for the match too so we were terrified lol.

Daniel Johnson: What do you consider your current home promotion to be? Also, when was the last time you worked for your old home promotion with Abel?
Derek Ryze: My home is SWA. I’ve worked for them since I started thanks to Abel and sadly the promotion I started no longer runs. But Abel does come to SWA when time allows.

Daniel Johnson: How did you first get involved with DGUSA?
Derek Ryze: The seminar/tryout stuff they would hold. After that I just kept going and going to their shows to keep face time. Then in my opinion what really got me on was Jon Davis. He helped and continues to help guide my career. Anyone can learn tons from that guy.

Daniel Johnson: What was the most important thing you learned from Jon Davis so far?
Derek Ryze: Make yourself marketable, find your one thing that will grab people’s attention. Like mine is the kick in tha face gimmick.

Daniel Johnson: Correct me if I’m wrong, but I believe the first match you had for DGUSA was teaming with N8 Mattson against Arik Cannon and Pinkie Sanchez at DGUSA Untouchable 2012. What was the experience like of working in front of a DGUSA crowd for the first time and what are your memories of this match?
Derek Ryze: You’d be very correct and I remember being very nervous mainly because working a DGUSA/north crowd is completely different than a southern crowd. My best memory was getting a beer shower from Cannon, that was a first for me. Lol, but I loved working with those guys. I’d like to work with them more but we live too far apart.

Daniel Johnson: How would you describe your current role in DGUSA?
Derek Ryze: Oh, I’m loving it! “The Fighting Spirit,” it is so simple and so marketable at the same time. What sucks is I’m down and out for a while due to injury. But the nickname/gimmick was Gabe Sapolsky’s idea.

Daniel Johnson: A few months back you wrestled in a six way freestyle match for DGUSA. Do you have any memories from this match? Also, what, if any challenges are there in making sure you stand out in a match with five other performers?
Derek Ryze: Oh yeah, I loved the match, but since I’m a southern guy I’m not much of a fan of multi-man matches. One funny thing that stays in my head was when Caleb Konley caught me on his shoulders, it was all nuts lol. I really enjoyed working with Drew Gulak and would love to work with him lots more.

Daniel Johnson: This is a broad question, but what if anything makes DGUSA unique from other promotions out there?
Derek Ryze: Oh wow! And this is just my opinion, it brings together some of the greatest talent in the world to put on some great shows for the fans. Heck, I’m on the roster and I still get a kick out of watching the shows.

Daniel Johnson: For readers who have yet to check out DGUSA what is one thing you would tell them to get them interested in the product?
Derek Ryze: Fans of great wrestling on any level be it comedy, hard hitting or high flying DGUSA has it all!

Daniel Johnson: Looking to the future who are some DGUSA wrestlers you have yet to work with that you would like to?
Derek Ryze: AR Fox, The Young Bucks, Trent Baretta, Ricochet, forget it the entire roster lol.

Daniel Johnson: Haha, when all is said and done what do you hope to have accomplished in DGUSA?
Derek Ryze: I’d be lying if I didn’t say to win the Open the Freedom Gate Championship.

Daniel Johnson: I also had some more general questions about your career. Are there any promotions you have yet to work for that you plan to work in the near future?
Derek Ryze: Honestly, I’d like to work overseas to learn more from the different styles they have to offer. So any that would be willing to have me over I’d love to.

Daniel Johnson: What do you consider to be the best match of your career so far and what makes that match stand out?
Derek Ryze: My three matches I had with Jon Davis in my home company. Those in my opinion helped me stand out from the crowd so to speak.

Daniel Johnson: In addition to DGUSA another promotion you have been working for recently is FIP. How did working there come about for you and what has stood out most for you out of your work for FIP?
Derek Ryze: It came from Davis and a great ref getting me a chance at the JCP X Cup and it snowballed after that. It’s a great place to be seen on a bigger scale than just normal indie shows.

Daniel Johnson: How does 2013 compare to your past years in wrestling?
Derek Ryze: Oh it has been a great ride! Got to meet and see new places. Work in new cities I’ve never worked in before. Have made me some great memories to carry with me the rest of my life.

Daniel Johnson: You mentioned your current injury earlier. How did this injury happen and when do you expect to be fully recovered?
Derek Ryze: My right knee has been bothering me for some time now and I had a match where my knee got landed on and hyper extended my LCL. Should *fingers crossed* be back by early to mid November.

Daniel Johnson: On a lighter note I always like to hear ribs and road stories. Do you have any that you could share?
Derek Ryze: Yeah, it was after the last DGUSA shows. I was dropping off Davis in Florida and my car just dies so I had me an impromptu vacation in Florida hanging with Davis.

Daniel Johnson: I also like to ask five non-wrestling related questions just to make interviews a little more fun. Other than wrestling, what television shows do you enjoy watching these days?
Derek Ryze: Let’s see The Walking Dead, new TMNT series, Digimon, World’s Dumbest Criminals and almost anything in between.

Daniel Johnson: What was your favorite movie that has come out within the last year?
Derek Ryze: Man of Steel hands down.

Daniel Johnson: What food did you try for the first time this year that you liked the most?
Derek Ryze: Protein pizza.

Daniel Johnson: Haha, no problem. What is the last book you read and would you recommend it?
Derek Ryze: I haven’t seen any good books out as of late, but, and this might sound dumb to some, but I really enjoyed the Percy Jackson series [by Rick Riordan].

Daniel Johnson: I wanted to close with just a few more brief wrestling questions. What is the weirdest part of being a pro wrestler?
Derek Ryze: Shaving your legs or just my quads in my case lol.

Daniel Johnson: Who is one wrestler 25 or under that you think readers should know about?
Derek Ryze: BJ Hancock.

Daniel Johnson: Is there anything you would like to promote?
Derek Ryze: Please and thank you. My home promotion will be having Jonathan Gresham as part of their next show on November16 in Forest City, North Carolina.

Check out Derek Ryze in action! In this match from ROD Wrestling, Ryze wrestles against Mike McCloud in Hickory, North Carolina: