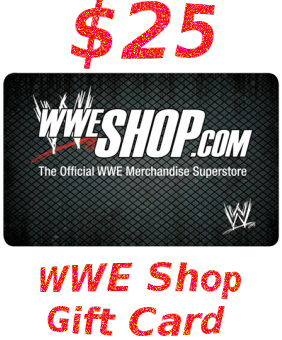 This week readers have one last chance to win a $25 WWE Shop Gift Card!

That’s right this contest is being extended beyond just a week and will run right until voting for The Crown J ends! What is The Crown J? Basically, an award for wrestling stars 25 and under who have yet to sign with WWE or TNA.

Votes are limited to one per individual. Contest entries are limited to one per voter. Entries must be made by 1:00 p.m. Eastern Standard Time on August 31, 2014 to be eligible for this contest. A drawing for the contest will be held at 2:00 p.m. Eastern Standard Time on August 31, 2014. The prize may not be redeemed for cash value or substituted for anything else. The contest is void wherever prohibited or restricted by law. The winner will be notified within 10 days of the contest drawing. If the winner does not respond within 10 days of being notified he or she will forfeit his or her prize. All entrants, as a condition of entry, agree to be bound by the rules outlined in this paragraph and the decisions of the sponsor (Daniel Johnson), which shall be final and binding.