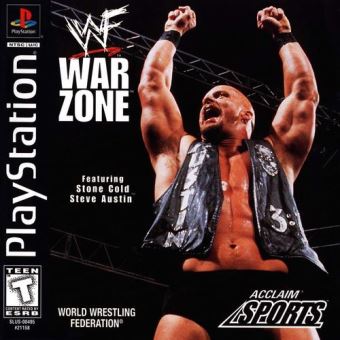 When WWF War Zone came out, the World Wrestling Federation hadn’t released a video game in over a year. They had just spent the last two years getting their asses kicked by WCW, and with the dire financial situation the company was going through at the time, they obviously had bigger things to worry about. But by mid-1998, the WWF was on the rebound. “Stone Cold” Steve Austin had caught on fire with the fans and penetrated the mainstream, the company had fully rebranded itself with its new “Attitude,” and while its new content was controversial and polarizing, it was fueling fresh new interest in the product.

Now that the WWF had gotten its mojo back in terms of onscreen product, wrestling fans were eager to see how the WWF would usher in the Attitude Era on the video game console. As it turned out, though, the beginning of a new era for WWF video games was…well, mixed.

War Zone came out very close to the THQ/AKI WCW games: WCW vs. nWo World Tour and WCW/nWo Revenge, and the comparisons and contrasts between those games and Acclaim’s title were inevitable. Whereas AKI brought a no-nonsense, straightforward wrestling experienced that began and ended with what players could do in the ring, War Zone instead comes off with a lot of personality and style. The intro kicks off with the edgy, Raw is War-like presentation the WWF had introduced a while ago, promising an immersive WWF experience. On top of that, some of the WWF’s biggest stars of the early Attitude Era are featured, including Steve Austin, The Undertaker, Kane and…Bret Hart?

Yeah…this is about the time that you notice something’s a little off about the game: The roster is already outdated. In a WWF game released quite a few months after Montreal, Bret Hart is in it, along with The British Bulldog. HHH goes from one moment being presented as the snooty Connecticut blueblood he was in the New Generation Era, to the D-Generation X rebel he was in the Attitude Era. Vince McMahon is on the (surprisingly decent) in-game commentary alongside Jim Ross, despite the fact that he had long moved on to becoming the Mr. McMahon heel character and embroiled in his feud with Stone Cold.

Even though WWF War Zone is a game released in 1998, this game actually captures the WWF of 1997. That might not sound like too big of a deal, but the truth is, it actually does change quite a bit. Despite only being a year’s difference, the WWF product of 1997 and 1998 were significantly distinct from each other. In the former, the company was still struggling to find a new direction, and was going through a gradual transition from the family-friendly New Generation to the raunchy Attitude Era. But by the time this game actually came out, there was no ambiguity; WWF had gone Attitude all the way, the New Generation’s two top stars, Bret Hart and Shawn Michaels, were gone from the WWF ring, and everyone recognized that DX consisted of HHH, X-Pac, Chyna and The New Age Outlaws.

It seems that War Zone had been spending a long time in development before it was released, because it clearly was not able to keep up with the rapid changes the WWF was experiencing at the time. Right off the bat, this is a stumbling point for the game; the onscreen product it represented had long since moved on, and a game with a yesterday’s-news roster is set to face an uphill battle to impress the wrestling gaming community.

But let’s be fair and look at the actual gameplay. Does that make up for its initial stumble? Well…that’s subjective. As opposed to the AKI games’ accessible, “Press one button to get the move you want” gameplay, War Zone sticks to the way that wrestling and fighting games had been doing things for years in the 1990s: Button combinations. If you want to move beyond simple punches, kicks, and restholds, you need to, for example, press left, left and then B + Up Triangle to execute an advanced move like a chokeslam.

Lots of people today ridicule this system as overly complicated, but I’m going to be fair here: It’s not as hard as some people say. You can check the pause menu to learn how to do the moves, so once you get used to it, you’ll be able to figure out how to execute the cooler wrestling moves without too much difficulty. The game even gives you the opportunity to practice and get used to the individual wrestlers’ move sets, via a training mode. But then again, you have to look at the big picture: I’m taking several seconds to press a bunch of buttons to get my wrestler to begin a stiff, awkward animation of giving the other guy a huracanrana. In contrast, I can play World Tour, where doing a huracanrana takes one second and is animated to actually look like it’s being carried out by a real human being. Furthermore, the game suffered from a bad oversight: Finishing moves, while available, do not have their combos displayed on the move menu, requiring the player to learn how to execute finishers by looking them up from outside sources. Acclaim would at least rectify this problem in its future wrestling games, but they should’ve done that from the beginning.

The fighting style of War Zone isn’t necessarily bad, but at a time when a much smoother, more innovative alternative had already become established, it’s hard to be impressed by Acclaim’s conservative approach. And really, that’s one of the most perplexing themes of War Zone: In some ways, it’s pretty progressive, but at the same time, it always has one foot in the stale, needlessly complicated old ways of making a wrestling game. It has smooth graphics for its time, in-game commentary better than that of many SmackDown games, wrestlers giving voiceovers (and, in the PlayStation version, recorded promos), and a fairly decent selection of match types, including cage match, hardcore, Royal Rumble and gauntlet matches. It offers a pretty creative way to encourage players to engage in a more multifaceted offense and wrestle a more exciting match, via a crowd support system where wrestlers gain momentum by using a variety of exciting moves, and start losing the crowd’s support when they engage in repetitive strikes or other attacks. On top of that, it was actually one of the first games to have a fairly extensive create-a-wrestler system, giving gamers the first experience of what would become an essential component of wrestling games.

But then, you have the awkward, clunky in-ring animation. You have the now-cliched life bar system, limiting how non-linear and unpredictable matches could be. You have the bothersome button combos. It’s almost fitting that the game has an outdated roster: The problem with War Zone is that it hasn’t yet fully broken through the cusp and kept up with the changes being experienced in both wrestling itself and in wrestling games. At a time when both were changing very rapidly to adapt to the new tastes of its fans, Acclaim isn’t keeping up, and remains stuck in the mid-1990s.

I wouldn’t necessarily call WWF War Zone a bad game. By itself, it has quite a bit to offer, and I have a lot of fond memories of playing it. But it hasn’t aged well. The innovations it offered in terms of style and presentation have long become standard, and the gameplay pales in comparison to its contemporaries. There isn’t much reason to go back to it, other than nostalgia. Ironically, at a time when the WWF had been newly revitalized and become fresh and exciting again with the onset of the Attitude Era, its first game of that era is passe, and would quickly be left behind by the rest of wrestling gaming.