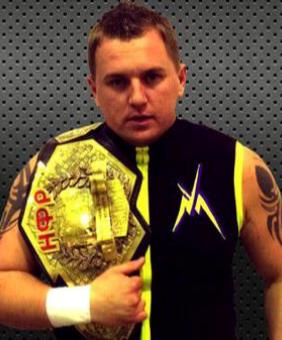 Interviewer’s Note: Ilya Malkin is a Russian wrestler with seven year of in-ring experience. Malkin chiefly performs for the Independent Wrestling Federation (IWF) in Russia where he is the current holder of the IWF Heavyweight Championship. Malkin earned the title on January 25, 2014 when he defeated Ivan Markov at IWF Danger Zone 81. Aside from wrestling for Russia’s only major independent promotion, Malkin is an internationally traveled competitor and has had a particularly exciting 2014. This year Malkin has debuted for Beyond Wrestling, International Wrestling Cartel (IWC) and Vicious Outcast Wrestling (VOW), all of which are based in the United States. Malkin has also worked in Singapore for the first time in 2014 where he wrestled Zema Ion and Johnny Gargano in separate matches for Singapore Pro Wrestling (SPW). This interview was completed on September 15, 2014. In this interview Malkin and I focus on his current run with the IWF Heavyweight Championship.

Daniel Johnson: For those unfamiliar with you where and when were you born and how long have you been wrestling?
Ilya Malkin: I was born in Moscow, I have been a professional wrestler for seven years.

Daniel Johnson: Where did you train to become a wrestler and how long did you train before having your first match?
Ilya Malkin: I spent training in IWF in Russia. In fact, I very quickly mastered the basics of wrestling, because I very much like wrestling, wrestling to me is life! And it took me four months before I had my first match.

Daniel Johnson: I was curious, correct me if I’m wrong, but you started in 2007 and IWF has been around since 2003. Did you go to any IWF shows as a fan before becoming a wrestler. If so what were your first thoughts of the promotion and how did you transition from fan to wrestler?
Ilya Malkin: IWF began to carry out shows in 2002. I did not go on the show and was not a fan because I was a student in another city, I watched the IWF show on TV and the Internet for following foreign wrestling promotions.

Daniel Johnson: You are of course the current IWF Heavyweight Champion, but going back a little bit I was wondering if you remembered your very first match for IWF. Who was your opponent and what stands out from that encounter for you?
Ilya Malkin: It’s been a long time. I can only highlight the fear that I had the whole match. When I had the match, I was only thinking about one thing, act with dignity, but as it usually happens in the first few times nothing good was obtained lol.

Daniel Johnson: Cool, Getting to more recent times you won the IWF Heavyweight Championship in your first match this year for the promotion. This was in a singles match you wrestled against Ivan Markov who you have wrestled several times before. How did you think of how the match turned out?
Ilya Malkin: Yes, I fought with Ivan Markov. We have had a lot of matches for my championship. Every match with him is unique, and we have had matches with different rules and hardcore matches. He’s a great fighter, working with him is fun and winning a championship from Ivan Markov was a double pleasure.

Daniel Johnson: Do you consider Markov to be one of the wrestlers you have some of the best chemistry with? If so what do you think makes you guys click in the ring?
Ilya Malkin: Yes, yes, yes, I have great chemistry with him. Perhaps this is due to the fact that we have had a lot of matches. Because we are confident in the ring, at 100 percent in each other’s actions.

Daniel Johnson: Your first IWF Heavyweight Championship defense was against TNA’s Zema Ion at an IWF Danger Zone show. What stands out about this match for you and about Ion as an opponent?
Ilya Malkin: Yes, my first defense of the championship was against Zema Ion. My first match with him, was in Singapore, even then I realized that I had met in the ring with a true professional and a great talent. The championship match in Moscow against Ion was awesome. He is a TNA star, very popular with Russian fans, and they supported Zema. It was a memorable event, I got invaluable experience.

Daniel Johnson: The following month you wrestled another native Russian, Alexei Schukin. What did you think of how that match went?
Ilya Malkin: Alexei Schukin is a very strong and a decent wrestler, but in my experience and ability for him to help me in the game, I had no problems.

Daniel Johnson: Speaking of native Russian talent for fans that may not be familiar with the Russian wrestling scene so much who are some workers you would suggest they check out? Also, any particular matches you would suggest to a first time viewer of Russian pro wrestling?
Ilya Malkin: In the IWF I would advise to pay attention to Sergey Bely. This guy has recently made his debut, but has already shown a lot in the ring. He already has had matches against foreign stars. He was also on a tour of the USA with me. And of course I can recommend matches with Anton Deryabin and naturally me.

Daniel Johnson: Out of those talents you mentioned or even beyond them what IWF wrestlers are you most looking forward to defending the IWF Heavyweight Championship against in the near future?
Ilya Malkin: I will mention only two, and both of them are not from IWF. I want matches against AJ Styles and Austin Aries.

Daniel Johnson: You have defended the IWF Heavyweight Championship outside of the IWF, wrestling Johnny Gargano back in May. Do you have any particular thoughts that come to mind working this match and on Gargano as an opponent? I believe this was your first time working with him.
Ilya Malkin: Yes. We worked together, first time. Gargano is a great opponent. He has excellent skills and he is amazingly agile. He is an experienced wrestler and maybe I learned something from him.

Daniel Johnson: This is a little off topic, but how has it been working SPW? I know you have been there at least twice. Does this promotion being run by Vadim Koryagin, who also operates IWF, make the experience more comforting all?
Ilya Malkin: There is a difference between SPW and IWF. Different countries, different mentalities. Plus in Singapore it is just the beginning and it is a pleasure to be part of this new federation.

Daniel Johnson: Getting back to IWF stuff aside from your current reign you have been wrestling for IWF since your career began seven years ago. How has the promotion changed since you first started working there?
Ilya Malkin: Over the past seven years IWF has grown in quality and popularity. An example of this is some of the wrestlers on our shows have been Zema Ion, El Generico, Samuray Del Sol, CIMA and many others.

Daniel Johnson: Speaking of your IWF career, more generally outside of winning the IWF Heavyweight Championship, what has been your proudest moment in the company?
Ilya Malkin: It’s simple. I created the most influential and dangerous group in the world of pro wrestling.

Daniel Johnson: I know back in 2011 you also won a huge president’s cup 29 man battle royal. What are your thoughts on this match and on battle royals generally?
Ilya Malkin: I like to kick ass and then throw them out of the ring. And after it all I feel like a king of ring.

Daniel Johnson: I wanted to also talk with you a bit about your career outside of IWF. However, before we go on I was wondering if there was anything else you wanted to mention about IWF?
Ilya Malkin: No.

Daniel Johnson: I also wanted to talk a little about your career outside of IWF. Correct me if I’m wrong, but I believe the first time you wrestled outside of IWF was for the Professional Wrestling League (PWL) another promotion based in Russia. How did this come about and what are your thoughts on this promotion?
Ilya Malkin: This promotion no longer exists. In Russia there is only one promotion and it is IWF.

Daniel Johnson: Speaking of your work outside of the IWF, 2014 has been a huge year for you so far. Another promotion you recently worked for, for the first time is the International Wrestling Carter in Pennsylvania. How did that experience come about?
Ilya Malkin: It was an honor to be part of the show, which was attended by such wrestlers as Bret Hart, AJ Styles, The Steiner Brothers and many others. It was a wonderful experience and I’d love to come back again.

Daniel Johnson: You wrestled two matches for IWC one in a three way taking on two of their top stars in Facade and Zema Ion. Another was a three way tag match where you challenged for the IWC Tag Team Championship teaming with Sergey Bely. What memories from these matches most stand out?
Ilya Malkin: I loved working with Jock Samson and great talent “Neon Ninja” Facade.

Daniel Johnson: While in the United States you also wrestled a match a piece for Beyond Wrestling and VOW. How did these opportunists come about and what are your thoughts on each of these matches?
Ilya Malkin: These matches have been in different styles. I took from these matches the best. They helped raise my own skills.

Daniel Johnson: To end interviews I like to ask five non-wrestling related questions followed by a few more brief wrestling questions. My first question in this series is, what is your favorite movie to come out in the last year?
Ilya Malkin: Transformers 4.

Daniel Johnson: What do you enjoy watching on television these days?
Ilya Malkin: Football and NHL hockey.

Daniel Johnson: What is the last book you read and would you recommend it?
Ilya Malkin: Mikhail Lermontov, A Hero of Our Time.

Daniel Johnson: What is your favorite song to come out in the last year?
Ilya Malkin: None.

Daniel Johnson: Have you tried any new foods in the past year? If so what has been your favorite new food you have tried?
Ilya Malkin: Singaporean food: Hong Kong noodles.

Daniel Johnson: I’m always interested to hear ribs and road stories. Do you have any you would be able to share?
Ilya Malkin: I don’t have any interesting road stories.

Daniel Johnson: I’m also always interested to hear about things people find weird about their own situation. What, if anything, is the weirdest part of being IWF Champion?
Ilya Malkin: I don’t like this question and I’m not going to answer it.

Daniel Johnson: My last question is, is there anything you would like to add?
Ilya Malkin: Nothing.

Check out Ilya Malkin in action! In this match from IWF Danger Zone 76, Malkin takes on Samuray Del Sol, the man who would become Kalisto in WWE NXT a short time later: