Every now and then, the World Wrestling Federation/World Wrestling Entertainment takes the time to acknowledge that first initial of theirs, and give the tip of the hat to its international fanbase. To this day, America’s number one wrestling promotion enjoys a decent following throughout the world and goes on global tours. And one of their most common destinations is just across the pond, performing for our fellow fans in Western Europe. The WWF’s European following has ebbed and flowed over the years, just as its popularity has ebbed and flowed in its home country, but when it catches on, it can be lucrative.

One of the periods when the WWF had a good run in Europe was in the early 1990s. The Hulkamania boom period was entering its twilight, but not before the WWF began airing wrestling shows overseas. This allowed for a substantial increase in its popularity in Europe, particularly the United Kingdom, where the British pro wrestling scene was undergoing a turbulent and eventful period of its own with the decline of Joint Promotions and growth of All Star Wrestling (ASW). The WWF got airing on Sky TV, and had good house show runs. They even went so far as to host one of their major pay-per-views, WWF SummerSlam 1992, at Wembley Stadium, headlined by the memorable WWF Intercontinental Championship match between Bret “The Hitman” Hart and The British Bulldog, which ended up drawing over 80,000 fans live.

And, in a further acknowledgment of the WWF’s growing internationalism, they had a video game released centering entirely on the promotion’s relationship with the continent. And if that weren’t unique enough, they took advantage of this nifty new thing of the time: Computer gaming. No, kids, those square-shaped things weren’t drink coasters; those were disks, and one of the disks released in 1992 contained a game called WWF European Rampage Tour. This would be a game that would be primarily aimed at their growing number of European fans, giving them and other fans across the world a chance to have a WWF experience on their home computers.

Unfortunately, someone had better call The Hague, because we have an international atrocity on our hands.

If I could use one word to describe a consistent theme with European Rampage Tour, it would be “limited.” First of all, there’s only one type of action you’ll be seeing in this entire game: Tag team wrestling. It’s a game focused exclusively on tag teams.

Hey, wasn’t there also another old wrestling game that only included tag matches? In fact, I believe it was actually called Tag Team Wrestli…

Anyway, second of all, you have a selection of only four wrestlers. You get to choose two out of the WWF’s four biggest babyfaces of the period: Hulk Hogan, “Macho Man” Randy Savage, The Ultimate Warrior and Bret Hart. Whichever two you choose will be your tag team duo, setting out to capture the WWF Tag Team Championship over the course of the WWF’s tour of Europe. Sean Mooney appears to announce the start of the tour, and you hit the ring for your first match.

The graphics are pretty good. But the controls…let’s talk about the controls. You can control this game using either your keyboard or a joystick. I don’t have a joystick, so I’m using my keyboard. It’s a little cumbersome, but it can be done (for example, it’s not a problem at all to play WWF WrestleMania: The Arcade Game on a PC either). Besides, it’s a simple matter to control your wrestler; all you have to do is move the arrow keys, right?

Well, boy, did I have a surprise when I found out that the arrow keys did nothing! Once I checked the game’s manual, I found out that the Player 2 controls use the arrow keys to move. But for Player 1, you go up by pressing the “Q” key, down with “A,” left with “O,” and right with “P!” Those are keys on the opposite side of the keyboard! Once you start doing it that way, you get used to it, but why would you make such a non-intuitive control scheme the default choice!?

Oh well, at least with all the keys available to me on a computer system, I should have a variety of moves at my disposal, right?

Nope. It turns out that, aside from moving, there’s only one other key that does anything: The strike key. Pressing this key will allow you to punch, kick, pin, tag out to your partner and, if your opponent is stunned, occasionally do holds or slams. There’s no strategy here, and the wrestlers don’t have any distinctive signature moves either; all you have to do is keep tapping the strike button, doing whatever attack it happens to let you to do, until your opponent is beaten up enough for you to pin them for a three count. Be still, my beating heart. You can technically do running attacks or climb the turnbuckle, but there’s no reason to do so, and if anything, doing so is a liability, since the opponent AI moves pretty fast and will likely get out of the way before you can do anything.

But all of this pales in comparison to one other detail: Just like in WWF WrestleMania for the NES, you have to manually turn around to keep facing your opponent. Seriously, early WWF games, why does this keep happening with you!? I have ZERO reason to ever have my back toward my opponent! It’s such an unnecessary, backwards game mechanic that almost every other non-WWF game manages to get right, yet constantly pops back up like a bad virus in the Fed’s early outings. To be fair, it’s not as bad as WWF WrestleMania, where having to take the time to turn around can be a huge liability in the match. But it can still make for some very ridiculous moments where my opponent is dodging my attacks by walking back and forth from my right to my left and back again repeatedly, and I have to keep manually turning around so I can strike them, chasing him like something out of a Tom and Jerry cartoon. 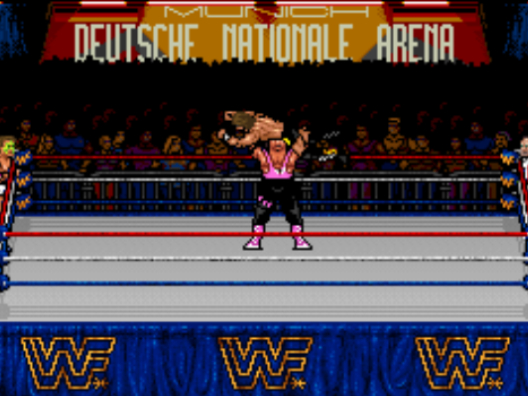 As I mentioned before, the game is essentially a tag team tournament. You start off with the first leg of the WWF’s European Rampage Tour in London, where you have to beat three heel tag teams in a row. First up is The Nasty Boys, Jerry Sags and Brian Knobbs (and I’d just like to point out that the game manages to get their names mixed up. Smooth move, Arc and Ocean). Second, it’s Money inc., consisting of Ted DiBiase and IRS. Finally, you face The Natural Disasters, Earthquake and Typhoon. Once you vanquish the three of them, it’s on to Munich where you face…The Nasty Boys, Money inc. and The Natural Disasters, again in that order. After that, it’s the final stop on the tour in Paris, where you face…The Nasty Boys, Money inc, and The Natural Disasters, once again in that order.

Just in case the matches themselves weren’t repetitive and monotonous enough.

Once you win these nine matches, your team returns home to New York City for a title shot at the WWF Tag Team Championship against the Legion of Doom at Madison Square Garden. If you can beat Hawk and Animal, your two guys are the new tag champs, and you win this very short game.

Essentially, you can beat this entire game in the same amount of time it takes to have a nice, refreshing nap. And considering the gameplay, that’s precisely what you’ll be tempted to do, since the matches are so boring, they could be a substitute for NyQuil.

On behalf of the American people, I apologize, Europe. You deserved a better game than this. We all did. The game had the potential to be really unique; it had a very distinctive premise, and it looks good. But it’s too limited, monotonous and clunky to be anything remotely entertaining. WWF European Rampage Tour may have tried to take us to England, Germany and France, but as far as I’m concerned, the only place this game will take you is on a one-way flight to Dullsville.

Like Loading...
‹ 25 and Under: Harley T. Morris at BDW in West Virginia
25 and Under: Owen Knight Heels It Up at AWE in Georgia ›