Well, folks, another WrestleMania has come and gone. Whatever your thoughts are on what transpired Sunday, I feel it appropriate to, in the spirit of the season, follow up on it with a game review centered on the showcase of the immortals and its long, eventful history. Without further ado, I present you: WWE 2K14.

With the reigns of WWE’s game series passed on to 2K Sports, the WWE’s flagship game series has since been slightly renamed to the WWE 2K series. However, Yuke’s continued on as developers, and even though THQ was no longer with us, 2K, deciding not to fix what wasn’t broken, decided to leave the game mechanics, image and design of its predecessor entirely unchanged. All that was left was to decide what to do for the presentation.

Clearly, they realized that they were on to something with WWE ‘13’s Attitude Era mode in the series’ most recent outing. The nostalgia and the ability to take part in some of the biggest mark out moments in wrestling history excited the passions of gamers everywhere. To say nothing of the opportunity it offered to present a stacked roster of legends and famous names from the past. What other subject matter could they explore to present an even better experience? Would it be as fun, engaging and addictive?

The answer? Well, WWE 2K14 decided that several years in the late 1990s wasn’t enough history. No, this time their campaign mode spans several decades, as it is entitled 30 Years of WrestleMania. Players would now have the chance to relive the most prominent and memorable matches ever to grace the showcase of the immortals. Each and every installment of WrestleMania up to 2013 is presented, representing the evolution of the WWF/WWE through the Hulkamania era, the New Generation, the Attitude Era, the era of Ruthless Aggression and the current Universe era. Beginning with the first WrestleMania in 1985, featuring the bodyslam challenge between Andre The Giant and Big John Studd, and concluding with WrestleMania XXIX, headlined by John Cena vs. The Rock II, we now have four different decades of WWE wrestling represented, and the great moments therein are there to be recreated.

Just like with ‘13’s Attitude Era, each featured WrestleMania match has a checklist of historical objectives, requiring you to perform certain moves and actions consistent with the real-life event being depicted. Doing so is your key to unlocking most of the game’s extra wrestlers, attires and arenas. And once again, these often trigger dramatic scenes of the legendary moments that have lived in fans’ memories for years. There’s the classic bout between Ricky Steamboat and Randy Savage. Hulk Hogan slamming Andre. The Ultimate Warrior defeating Hulk Hogan. Shawn Michaels vs. Razor Ramon in the WWF’s first major ladder match. Bret Hart and HBK going the distance in the iron man match (don’t worry, it’s abbreviated in the game). “Stone Cold” Steve Austin refusing to submit to Bret. Austin selling his soul to Vince McMahon in order to beat The Rock for the WWF Championship. The dream match between The Rock and Hollywood Hulk Hogan. HBK retiring Ric Flair. The Undertaker putting his streak on the line against Shawn Michaels’s career.

So, once again, you have the chance to recreate the same amazing spots and mark out moments you remember from the past, and take part firsthand in those good times. You can’t fault 2K and Yuke’s for going back to a formula that worked so well previously. And, indeed, there is quite a bit of nostalgia and drama to be enjoyed.

And yet, when you look at it as it plays out, the way this campaign works out in practice is a mixed bag.

Don’t get me wrong, there is quite a bit to enjoy about 30 Years of WrestleMania. Many of the moments do capture a similar mark out feel as the Attitude Era mode. And the wrestlers featured in these WrestleManias allow you to unlock a dream roster of legends spanning years upon years. Yet in other ways, the concept of 30 Years of WrestleMania stumbles in its execution. There are three particular reasons for this:

1. The story ends up retreading over very recently explored territory. It’s pretty novel when you start off and play through the 1980s and 1990s, but when you reach the Attitude Era, things start looking very familiar. You end up playing through WrestleMania XIV and XV, the exact same events which you just experienced in WWE ’13. And with all due respect to 2K14 and the quality of its gameplay, at the end of the day, it’s pretty much the exact same game as ’13. Midpoint through the campaign, you’re playing through recycled material, throwing off the campaign’s momentum.

2. The key to the success of WWE ’13 was nostalgia, the chance to relive long ago events in a sophisticated modern wrestling video game. Again, this works out great as you’re fighting your way through the eras of Hulkamania, the New Generation and Attitude. But once you enter the new millennium, things start to quickly lose steam. You end up playing through events that are way too recent to have that warm and fuzzy nostalgic feeling, and they simply didn’t make me as passionate as the earlier chapters.

3. The very concept of 30 Years of WrestleMania undermines the page turning, “Can’t wait to see what happens next” feel which made Attitude Era mode so engaging. Being that the chapters are each annual events with one years’ difference in storylines between them, they don’t flow as well into each other. It doesn’t have the same character and storyline-driven appeal showcased in WWE ’13. To illustrate: I ended up staying up all night and into the wee hours of the morning to finish ‘13, because I was so hooked by the flow of the Attitude Era chapters. With 2K14, I pretty much had no qualms about completing a couple of WrestleManias at a time, shutting the game off and picking it back up a couple of days later when I felt like continuing.

If this had been the first nostalgia-driven campaign mode released in a WWE game, I probably wouldn’t be too concerned about these issues. But unfortunately, this game has the tough act of WWE ’13 to follow, and, while an intriguing idea in theory, 30 Years of WrestleMania as a concept is not as good as the Attitude Era when it comes to execution. Not to say that it’s bad, because there is quite a lot of fun to be had with it; however, it pales in comparison to its predecessor. 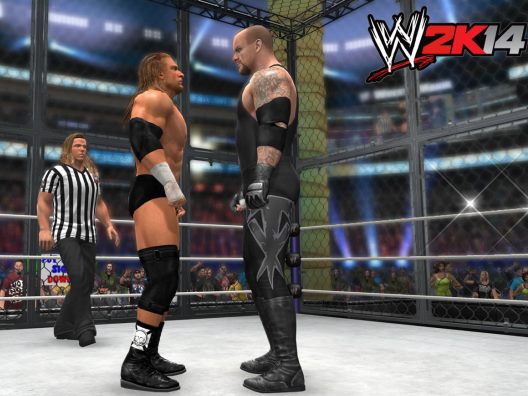 That being said, that’s not all there is to 2K14. The main chapters of 30 Years of WrestleMania are accompanied by a side game: The Streak, where the focus is on The Undertaker and his, at the time, undefeated streak on the biggest stage of them all (remember when that was still a thing? God, what a difference a year can make). There are two parts of this game. You can play Defend the Streak, in which you take control of The Phenom and engage in a gauntlet against a perpetual stream of individual opponents, trying to rack up as many defeats before one of them finally takes you down. It’s basically the Slobberknocker match, like we saw in the early SmackDown games, and it can be pretty fun to run roughshod and rack up as big of a count as possible.

The other part presents a balls-to-the-wall challenge called Defeat the Streak. Here, you choose any wrestler to take on a supercharged, extra-difficult Undertaker in a no holds barred match. ‘Taker brings his A-game to this match; not only does he have extremely fast reaction time and reversal capability, but he also has a slew of superpowers that can snatch away your victory just when you think it’s within your grasp. He can suddenly grab you for a chokeslam or lock in Hell’s gate if you approach him while he’s lying prone on the mat, and when you’re close to having him beat, he can turn off the arena lights and reappear behind you with an instant finisher stored. You can’t slack off, and you can’t pull any punches to beat him; your reversal skills will need to be finely honed, and you’ll need to put aside any qualms about fighting dirty and pulling out weapons. But once you finally do defeat him, you feel like a wrestling game god. Hell, with how triumphant this accomplishment feels, you may even feel on par with Brock Lesnar himself!

…It doesn’t get any easier to wrap your head around, does it?

Both Streak games are score-based, so your best performances will be recorded, and you’ll be able to share them online. On top of that, Universe mode has additions and further options, and there continues to be a great list of options for exhibition fights. Gameplay and graphics remain as smooth as ever.

All in all, WWE 2K14 is by no means a bad game. It continues to maintain the standards of quality of the series, and the Streak mini-games offer a unique challenge. But I can’t say it’s as good as WWE ’13. 30 Years of WrestleMania has its merits, but falls short of the standard of fun set by its predecessor. 2K and Yuke’s would go back to the drawing board to try to figure out a different approach to its campaign, which they would unveil in their next installment, WWE 2K15.

But wait! That is a story for another time.