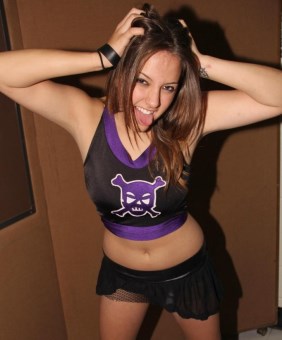 This past week on Monday Night Raw, the WWE brought up one of their NXT talents to the main roster. In NXT, she was known for her ecstatic “dancing” abilities and bubbly (literally) personality. Her name is Emma. For weeks prior, she had been shown in the crowd holding signs up, gaining some attention from the likes of Summer Rae and Fandango…or rather the detest of them. In a segment on the show, Santino Marella invited a fan to face Summer in a dance off, which Emma happily obliged and was selected by Marella. What happened after was…completely embarrassing. I have rarely cringed as bad as I had for Emma and her “dancing” – which is basically something Eugene might have done had he been the one entering the competition. It’s moments like this that make me embarrassed to be a wrestling fan, and had someone entered the room at that time and saw me watching…I would have died of shame. Her gimmick may have been more successful in the smaller, more personal arena at NXT, though I never enjoyed it, it certainly didn’t catch on during Raw as it played out to near silence and maybe some sympathy cheers.

Seeing Emma’s segment made me wish for something completely different, something with some more realism to it. Having been a fan of deathmatch wrestling and the company Shimmer, I have been watching Mary Dobson improve now as a wrestler for quite a while. When I first saw her, I freely admit I wasn’t too impressed with her work. It was just a regular match and it didn’t come across too well, but she was only young in her career and had some bits and pieces to put together before she’d improve. Working in deathmatches has helped her a lot.

Under the watchful eye of deathmatch legend, Mad Man Pondo, her trainer and real life boyfriend, she’s steadily made improvements in her all-around work. The first time I saw her working any type of deathmatch I wasn’t expecting much from her after the first time I saw her wrestle, but I was certainly more than willing to give her another shot. It was a deathmatch tournament with her and seven men, and she more than held her own against some really tough competition, including advancing past the first round. She’s shown with these matches that she’s not afraid to get in there with tough talent and battle it out, including bleeding right there with them. That takes guts.

Now, I don’t enjoy seeing women, or anyone, bleed, but in a world that has Emma in it, I crave something different and alternative. This is where Mary comes in. TNA had Roxxi before and I really enjoyed her hardcore work in the company, plus some of the best women’s matches the company has put on have been in some form of street fight/hardcore style match. Awesome Kong and Gail Kim were absolutely incredible, as well as Taryn Terrell and Gail tearing it up in both a last woman standing match and a ladder match. WWE has had the same success with the likes of Victoria, Trish Stratus and Lita competing in some brutal matches that have been incredibly memorable: Street fights, cage matches, etc. Mary can help TNA provide something different to their division, to help them stand out over the WWE crop of women.

I still believe that TNA needs to look for something that’s different to the WWE. Nothing sets TNA back more than looking like WWE lite. Hiring former stars is something that WCW did and we all know how that went in the long run. WWE is still thriving to this day and with the WWE Network on the way it’s not going to change anytime soon. TNA will not be able to compete with them, right now or in the near future. The most they can do is just try to be something different. If people switch over and just see that you’re doing the same thing as the WWE is, then they’ll just switch back over because they already have a WWE, they don’t need a second version of something they already have.

Hiring the likes of Andrew Everett, Matt Tremont, and Mary Dobson would all be a step in the right direction. Each provide something different and have the ability to captivate an audience in unique ways: Everett with amazing aerials; Tremont with his mic work; Mary with her ability to stand out in the women’s division.

And hey, if they don’t want to use her for her strengths, then she can also give them what they like, TNA. She’s quite a looker and isn’t shy of a photo shoot or two. It’s hard to find a guy that kicks as much ass as her while also looking so gorgeous. It’s rare and should be seen on a bigger stage. She’s only young and it would be a crime if she wasn’t picked up by one of the big two in the next five years.

‹ Puro Flashback: Yuji Nagata Takes on Kono Masayuki Inside a Cage
25 and Under: Devin Baker Wrestles Brandon Webb at a Carnival ›